Idris Elba Discusses Playing The Villain In ‘Star Trek Beyond’

With director J.J. Abrams having departed from the Star Trek franchise after helming the first two films in the rebooted series, fans were both ecstatic and somewhat unsure of Justin Lin, known best for his work in the Fast & Furious franchise, taking on the third installment. Even by the first teaser trailer released for Star Trek Beyond, it was easy to see that the film would be taking a much lighter tone than the past two. It’s a noticeable difference, which does have some worried about how the film will meld into the series, particularly in coming right after Abrams’ austere Into Darkness.

But just like with any installment in a science-fiction franchise, one aspect that always seems to be the most anticipated is who the villain will be, and what actor will take on the role. Eric Bana played the villain Nero in 2009’s Star Trek, followed by Benedict Cumberbatch as Khan for Into Darkness. Beyond‘s central antagonist has been named Krall, played by Idris Elba (Beasts of No Nation). In an interview with EW, the actor revealed Krall is part of an entirely new species made up for the film, not a Gorn as many originally thought. Elba described Krall’s species as having a very “Predatory” nature, as well as the motivations of the villain in the film.

What’s interesting about him is that he has a real beef with what the Enterprise stands for. Krall’s a character who’s deeply steeped in hatred, in my opinion, a well-earned hatred, for the Federation. It felt quite political. There’s a relatability to what’s happening in our world. Not everybody’s happy with what everybody calls the good guys. There’s some history that we explore, to understand why he feels the frontier needs to push back. There’s definitely an opposing argument to the good that the Federation think they do. There are purists that believe in independence, and believe that we’re all made differently for a reason, and will fight tooth and nail to defend that.

It’s crucial to a film like this to have a compelling villain, especially one that is played by a very talented actor like Elba. Having recently displayed his skill at playing an antagonist in Jon Favreau‘s The Jungle Book, taking on the character of Krall should be no problem for him. EW also released a new image of Elba in the reportedly substantial amount of prosthetics required to look the part. See it below. 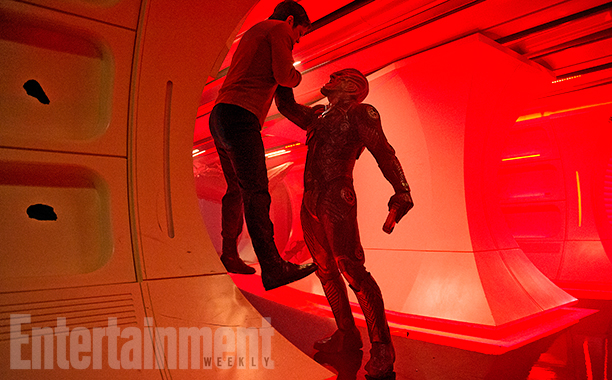 Hopefully, Elba’s words will put fans’ worries about the film to the grave, or at least subside them until Beyond‘s release this summer. Having created a new species is another exciting aspect to the character, although many Trekkies were anticipating a revamp of the previous rivalry between Captain Kirk and the Gorn species in the original Star Trek series. The hype for the film is quickly growing, not to mention a possible new trailer being unveiled for the film during a fan event on May 20th, celebrating the 50th anniversary for Gene Roddenberry’s beloved series. So, most will have to wait a few more months before getting their hands on the next installment, but hopefully it will be worth the wait.