Revisiting ‘Contagion:’ The Disturbing Cinematic Dystopia that has Become Reality

Revisiting the 2011 release of Contagion will surely strike a chord with any viewer living through our current global health climate. The film focuses on the outbreak of a deadly virus that quickly spreads across the globe and leaves a trail of death in its path. When it released, the film was presented as a dystopian look into reality- a scary portrait of what could be, in a way that feels beyond human control. Watching it in 2020, however, and the film reads more like a documentary than fiction. One can imagine a film like this one being made in ten years’ time as a dramatic recreation of the Coronavirus outbreak.

The plot of Contagion uses days to measure time, which is a unit that anyone displaced at home maintaining quarantine will find familiar. As the days tick by, the virus gets worse, and tensions heighten all over the world. The fact that the film’s virus is also of Chinese origin and stems from an animal just hasppens to be a bizarre coincidence. This shocking accuracy is not all due to chance; Contagion is known for its indulgent scientific research. Several pathologists worked with the writers to inform the most precise narrative possible of what a biological outbreak would look like. It’s so alarming just to realize how easily the current situation of the world was predicted, and frustrating to think why anyone didn’t listen to the experts?

The film encompasses several narratives, all of which intermingle in some way in their involvement in understanding the spread of the virus. Matt Damon stars as Mitch Emhoff ,whose wife and stepson grow mysteriously ill and die within hours of his wife’s (Gwyneth Paltrow) return from a business trip in Hong Kong. Dr. Ellis Cheever (Lawrence Fishburne) works for the CDC and is trying his hardest to get ahead of the sickness for the people of the United States. He sends Erin Mears (Kate Winslet) to Minneapolis, where Mitch and his family are located, to investigate the regional outbreak. Alan Krumwiede (Jude Law) is a blogger whose incessant on finding the truth helps him amass a large following as the outbreak begins to spread.

After Mitch’s wife and stepson die, the disease is suddenly present in various places across the country. Mitch is kept in isolation until the hospital doctors decide that he has a natural immunity to the virus and is let go to live with his daughter. His narrative thread is the one which viewers will empathize with most. He returns to his suburban home, learning with the rest of the country that the government has no idea what the pathogen is nor how to stop it, but push for a concept of social distancing.

At one point Mitch takes his daughter to the grocery store after the severity of the virus is publicized. After staring at the empty shelves, he then decides it’s unsafe to be in this pubic location, telling his daughter to throw away her gloves and sanitize her hands as they walk out. His character seems to have been written in perfect accordance with what the lives of most Americans have now become, and this seemingly predictive writing is undeniably eerie in how accurate it matches our current global and national state of affairs. 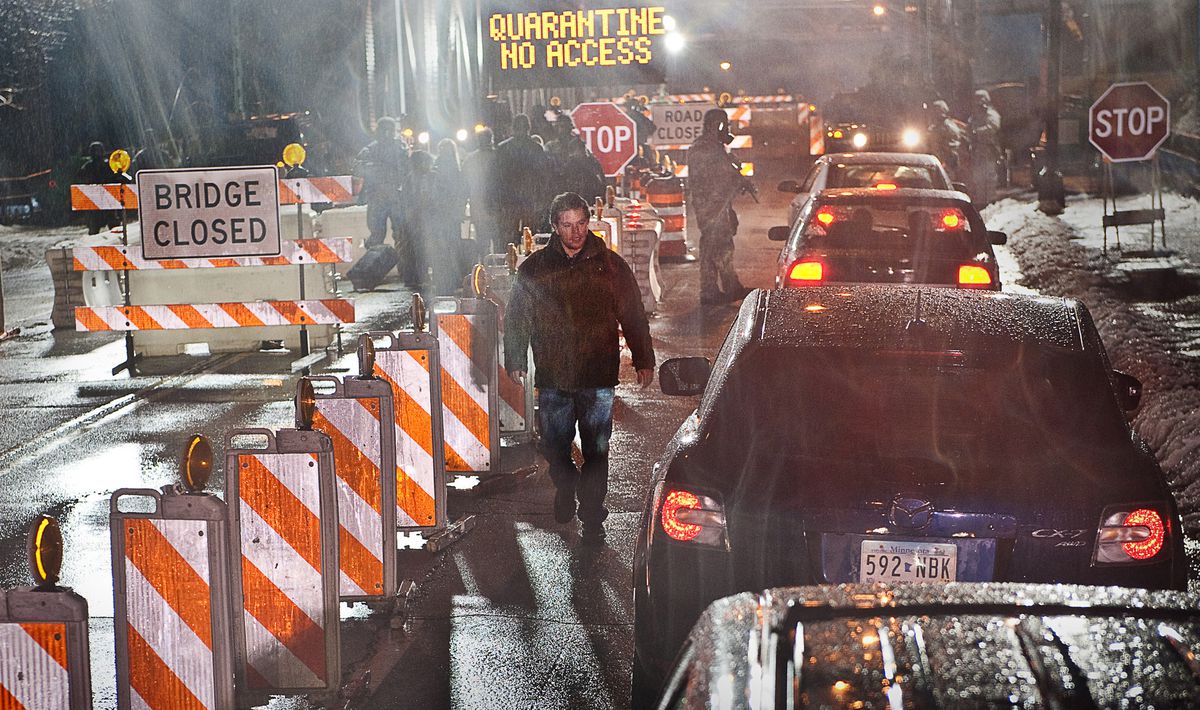 There are various parallels between the movie’s narrative and modern times, but it’s important to recognize distinct differences before you let this plot drive up your anxiety levels. Contagion‘s narrative unfolds as if the escalation of the virus globally was simultaneous to its growth within the United States; the virus happens all at once across the globe, which is clearly different to the spread of Corona from Asia to Europe and then the United States, as we have seen. Additionally, the United States seems to have put in place a quarantine enforced by martial law, which is very unlike the conditions currently seen across the States. Military enforcement of COVID induced regulations has been very much denied as a possibility at present.

Lastly, the populace in Contagion had an almost opposite reaction to the publicized severity of their virus compared 2020 America; they panicked. The streets are suddenly overwhelmed with discarded things, people loot any store they could, there are violent robberies of homes, etc. Sure, the United States has been experiencing the economic shocks of panic buying- demonstrated by the consistent lack of toilet paper in nearly any store in the country. But for the most part, citizens, in certain regions more than others, have had a very lax reaction to the pandemic. College students still went on spring break trips to Florida beaches, drunken tourists loitered around Bourbon Street in Louisiana, and Californians gathering in Huntington Beach to protest the state mandated quarantine.

Contagion has proved a challenging film in terms of spectating the modern pandemic. While watching it seems obvious to the contemporary viewer that these people should be wearing gloves and face masks in public, that they should be standing at least six feet apart, and that anyone displaying symptoms should stay home. It calls upon a breadth of specific knowledge that feels circumstantial to living through a pandemic. The awareness brought to the spectator’s internal archive of information regarding disease control is startling.

The timeline in Contagion is what is perhaps the most unrealistic, considering how the vaccine was found only 135 days after the fictional virus entered the United States, and currently COVID-19 has been in the U.S. for around 90 days without much word on the progress on a vaccine. It likely won’t be until next year that such a vaccine will be produced and available for mass distribution. 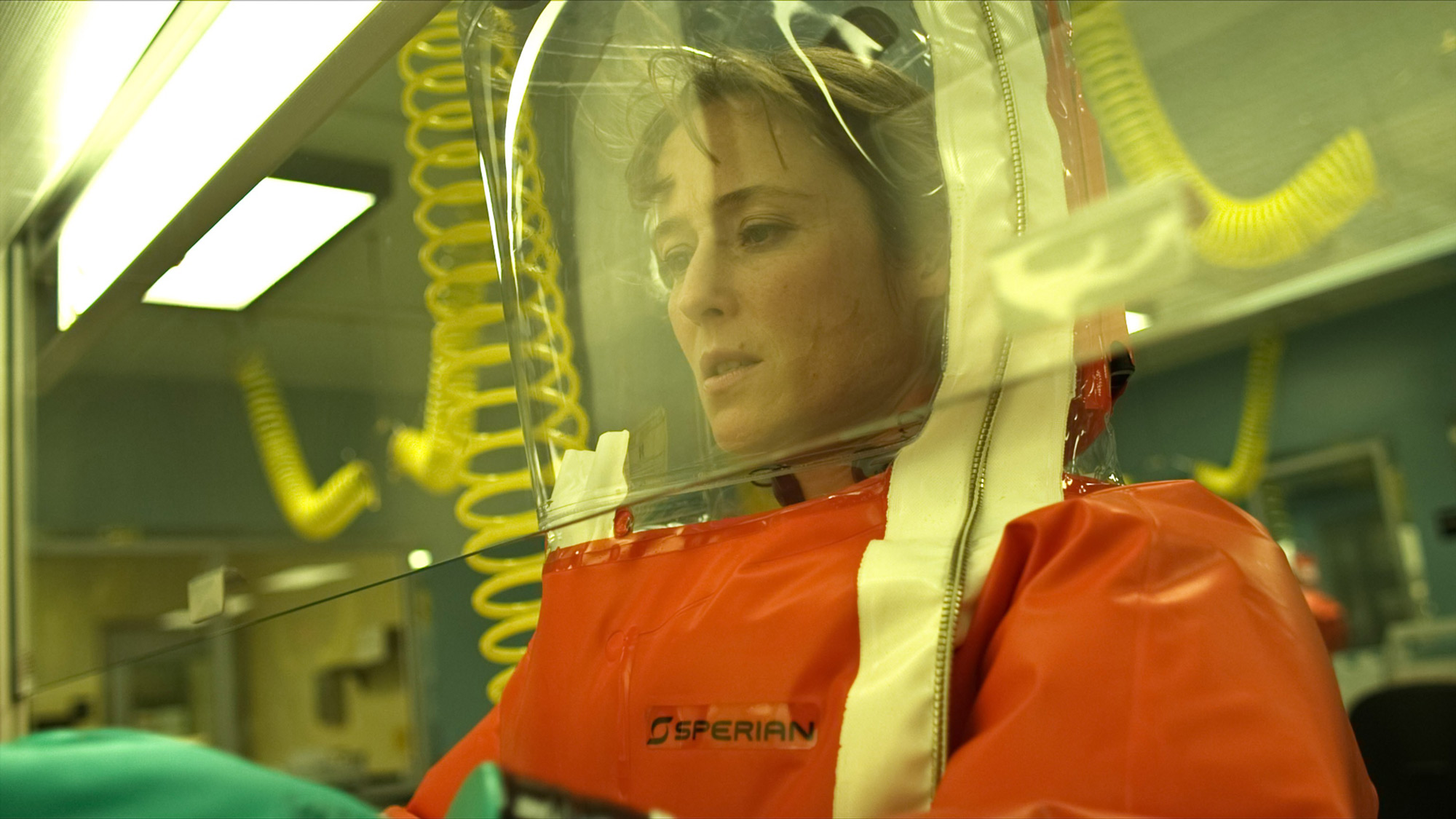 More than anything, the outdated fiction of Contagion’s manifestation into reality is terrifying. What can potentially reassure viewers is the film’s ending: a vaccine is successfully created and distributed. The distribution process is also a pacifying thought, giving out vaccines via a lottery system chosen by birthdate, rather than off of income level or health care accessibility. One would hope that the United States uses this equitable distribution of health care resources to improve its own issues of systemic inequality in the near future.