‘Birds of Prey’ Breakdown: Is this Really Feminism?

While fans were initially skeptical from early trailers,  Harley Quinn: Birds of Prey (Formally Birds of Prey (and the Fantabulous Emancipation of One Harley Quinn) was a truly effective feminist film. The movie took typical conventions of action and comic-based plots and pieced together an engaging story about women, for women.

The characters are truly what made this film strong in its pro-women message. Harley Quinn, despite her past representation as hyper-sexualized, is humanized in a way one might not expect. She is no longer depicted as a manic-pixie dream type of villainess; instead, she expresses a range of emotions and attributes that define her character as multi-dimensional and multi-faceted. She also acknowledges the abusive nature of her and the Joker’s relationship which is a greatly appreciated aspect of the dialogue, considering the couples’ romanticization in Suicide Squad.

Specifically, Harley’s costume and makeup did a great job of characterizing her as bad-ass and unique, without revolving her characteristics around sex. Her style suited this personality perfectly, with some pieces highlighting her sexual side, but mostly just being fun and colorful. This choice of mise-en-scene elicited a whiny reaction from men across the internet, who complained about Harley’s lack of provocative attire and that her characterization in Birds of Prey didn’t accurately reflect Harley from the comics. However, one of Harley Quinn’s signature looks is a full-length body suit, which covers her completely and isn’t really “sexy” at all. Her character surely does not depend on her desirability, and this film did a great job displaying that.

Another huge point in the film’s character department that sets it apart even from other female centered superhero movies was Birds of Prey’s lack of men. Throughout the film, male characters played an almost completely nominal role in Harley’s story. The only man who aids Harley is her landlord Doc, who ends up selling out her address in a betrayal without malicious intent. Films like Wonder Woman (2017) were surely a step in the right direction of representing women in action roles, but still made men integral to their heroine’s success or the narrative in general. On the other hand, Harley Quinn’s story was motivated by a man’s lack of presence yet remained focused on her autonomy throughout the film, rather than make her journey about finding someone new to replace him.

Similar themes can be found in the recent Harley-centric animated show  Harley Quinn, which also details her life experience after a breakup with the Joker. Unlike the film, this cartoon series involves a lot more interaction with men in general; the Joker is her competition in the villain realm, while at one point Batman ends up saving both Harley and her partner in crime Poison Ivy. This male involvement, although fitting with Harley’s DC universe, takes away from the story of Harley’s “emancipation” from the influence of men in her self-worth. However, the animated series seems promising in its up-and-coming representation, as there will be a plot line of romance between Harley and Poison Ivy in the future. This rejection of the heteronormativity typically seen in hero plots is a refreshing splash of inclusivity. 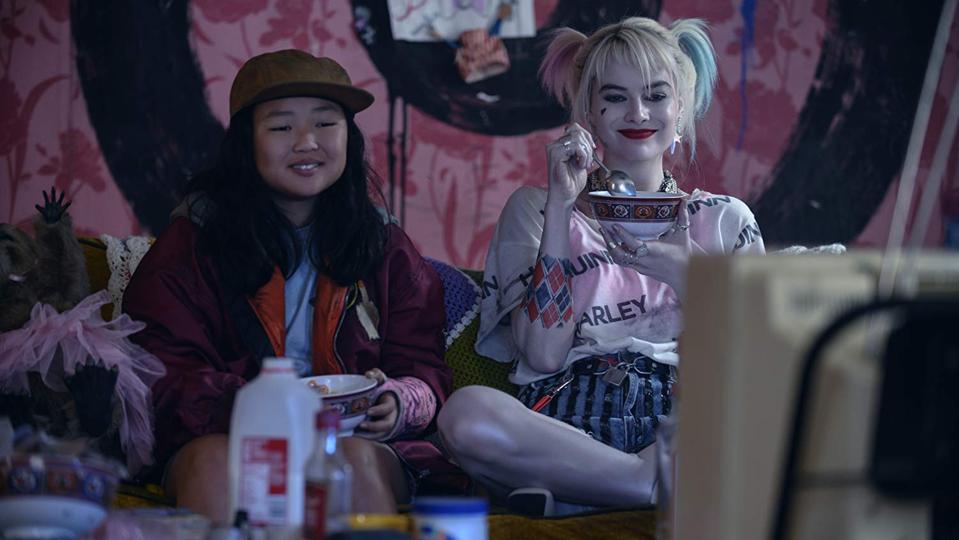 The plot ignited (wink wink) by Harley’s breakup with the Joker succeeds as a feminist text because of the engaging way it built relationships among the various leading women. Their friendships, or rather partnerships, were complex and well developed, especially in comparison to the flimsy relationships that last year’s Charlie’s Angels threw together. Birds of Prey, in fact, has a parallel plot structure: a group of established women take in an unskilled newbie who integrates into the group, in this case Cassandra Cain. Cassandra is a teenage pickpocket who, despite her standoffish attitude, ends up bonding with Harley, as well as the rest of the crew including Renee Montoya, Black Canary, and Huntress. Each of these women are defined by intricate backstories which distinguish each as a unique and complex individual. The relationships they form with each other are not perfect, but are nevertheless rooted in genuine connection and feel real. These bonds set the film apart from so many movies that previously failed to make relationships among women stand out in their perceivable authenticity.

All of the platonic love aside, the film also did a fantastic job of portraying the “super” women as strong and skilled fighters without reducing them to just this ability. Birds of Prey‘s fight scenes were aesthetically and structurally creative, making the violence feel not only palatable, but fun. None of the cast was strictly the femme fatale- even Huntress, who comes the closest to that archetype was attributed quirks that made her seem genuine without taking away her physical prowess. The satisfying fight sequences were the cherry on top of an already powerful narrative. Birds of Prey stands out as a movie about women in the way that it characterizes them. The cast is represented as authentic and human, rather than superficial and objectifiable. Sure, the film still adhered to typical Hollywood conventions, but it was still remarkably refreshing in the way its female cast had such a developed sense of self. Regardless of whether or not you consider Harley good or evil, or even redeemable, her characterization and Birds of Prey as a film has set the precedent for female-cast action films to come.