The 21st century, especially the 2010s and ’20s, have been a landmark for reboots, remakes, and sequels. Studios realize that they have the rights to a certain IP (intellectual properties) with one very popular movie from the 1980s and decide to either remake it, reboot it, or make a sequel. It’s a guaranteed money-maker because the IP already has a fanbase, so there’s no wondering if people will go see it. These films make money, but they’re often much worse than the originals. They’re cash-grabs, but sometimes fun cash-grabs that bring back some of the magic of the original. Top Gun: Maverick is, of course, a sequel to the very popular Top Gun which came out almost 40 years ago. It’s what is to be expected from a sequel made 40 years after the original: a modern-feeling film which takes the most beloved aspects of the original and replicates them to get people to buy tickets. For a sequel set 40 years after the original, Top Gun: Maverick isn’t awful. It’s not a masterpiece, but it’s fun. 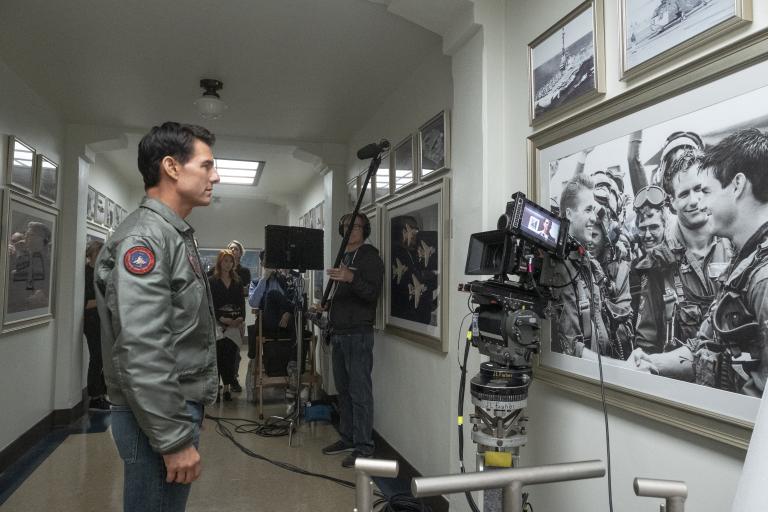 The obvious star and returning main character, Tom Cruise as Pete “Maverick” Mitchell, plays the same rebellious and hot-headed character that he played in the first film. If it ain’t broke, don’t fix it. Despite turning 60 this year, Cruise still brings the same energy that he did as a 24-year-old in the first film. He looks and acts so similar that there’s barely any difference from his original portrayal of the Maverick. Whether or not this is a good thing is up to the viewer.

Jennifer Connelly plays Mitchell’s love interest, Penny Benjamin. She runs a local bar frequented by Navy personnel. The chemistry between them is very similar to that between Charlie (Kelly McGillis) and Mitchell in the first movie. The female love interest seems to just automatically be attracted to Mitchell because, well, he’s Tom Cruise. It’s not original or terribly endearing, but it’s familiar.

Val Kilmer returns as Iceman, now an admiral. Kilmer lost his voice after his treatment of throat cancer, so he is only in a single scene in person. He communicates by texting and typing with a computer in the film. Despite this, the scene between Iceman and Mitchell is perhaps the film’s most powerful.

Jon Hamm is a new addition to the film as Cyclone, the stern and professional commanding officer to Mitchell. There has to be a commanding officer to clash with Mitchell’s reckless disregard for the rules. Hamm plays himself a military admiral. It’s just more Jon Hamm. That isn’t a bad thing, but he doesn’t bring anything too unique to the performance.

Miles Teller plays Goose’s son, Bradley “Rooster” Bradshaw. Rooster is given a clear and apparent conflict with Mitchell from the start. Rooster still holds resentment towards Mitchell for his father’s death. This internal conflict along with Mitchell being Rooster’s superior now makes for some good scenes between the two. These scenes are heightened if the viewer is familiar with the first film.

The one actor who did a great job and should have had more screen time is Ed Harris who plays a rear admiral fed up with Maverick’s antics. His voice is just so soothing. Oh well.

Arguably, the biggest draw of the original Top Gun is the amazing flying shots and cockpit point of views that it showed. In 1986, that was nothing less than extraordinary. In 2022, with technology that can de-age actors, create fantastical outer-space worlds and creatures, or just create realistic backgrounds with a green screen; it takes something really extraordinary to blow away audiences. Contrary to what would be expected, it’s practical effects which impress audiences these days, not fancy CGI. Top Gun: Maverick has plenty of practical effects, including all of the flying scenes. This brings the audience right into the action and really immerses viewers. The action scenes look just as good as they did in the original. This is the core of what makes the film so fun and relatable to the original.

The story, like all reboots, remakes, and sequels, is very basic and the least focused-on aspect of the film. The basic setup is that Captain Mitchell has to teach the new batch of Top Gun recruits for a mission requiring manned fighters in a drone-dominated battlefield. Mitchell is desperately trying to prove to the military that manned fighters are still needed and that they should not divert funding to more practical drone programs. The basic plot is that this new batch of Top Gun pilots has to destroy an illegal uranium plant in an unnamed country created by unnamed enemies. No, neither the enemy nor the country are ever named. At least in the first one, Russian MiGs were named in dialogue, and that was during the Cold War. The unnamed enemy hinders the immersion, but it’s probably better to create a fictional villain instead of name-dropping a real country with the possibility of upsetting a real enemy nation. Again, a very basic and lackluster task, but that’s not the point. The mission is just a means to cram in some cool action shots of fighter planes and have Tom Cruise be able to romance a new woman.

Fans of the original Top Gun will have plenty of nostalgia, call-backs, and familiar action to appease them. Newcomers to the film can also enjoy it for what it is. Although it would be helpful and would add to the experience to see the original Top Gun before Top Gun: Maverick, it’s not necessary. All of the necessary exposition is given to the audience in Top Gun: Maverick. Longtime Top Gun fans and newcomers alike can enjoy the impressive fighter scenes and Captain Mitchell’s romantic antics.