‘The Contractor’ is an Uninspired, Lackluster Action Thriller with No Bite! -Movie Review

Generally, two thoughts enter our minds when sitting down to watch a movie. First, who is the target audience for this feature, and what is the film’s purpose? The latter question is the most important. Movies are supposed to entertain the audience through heartfelt drama, exciting action, and witty dialogue, scare us into grabbing the person next to us, or make us laugh. There is nothing worse in this world than when you watch a movie and are left feeling nothing once it’s over. The Contractor, sadly, is one of those movies that offer nothing in terms of entertainment or an offer as to why one would be interested in seeing this movie.

The movie follows Sergeant James Harper (Chris Pine), who is trained in Special Forces. After a devastating knee injury, he is honorably discharged from service only to have his benefits stripped, leaving him financially crippled. He’s desperate for cash, and the bills are adding up. Instead of finding a regular day job or even an overnight shift, Harper enlists the help of an old friend named Mike (Ben Foster). Mike has his problems too, but with his current job, he’s comfortable and is living a good life.

Mike works for a private contracting organization that enlists the services of “retired” military personnel for financial gain. These are essentially mercenaries for hire. Harper meets with the head of the organization named Rusty (Kiefer Sutherland), and during this meeting, Rusty explains how their operation works and even writes him a check for $50,000 just to get started. The mission is simple. The team will go to Berlin, contact the intended target, interrogate him, and wait for further instructions. A piece of cake mission that shouldn’t go wrong. 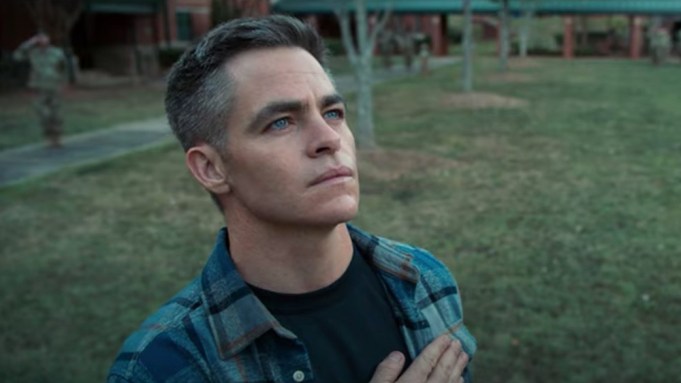 Well, what a surprise. Everything goes to hell, resulting in a medical research facility being set ablaze, German police officers getting gunned down in the street, and Harper becoming a target to the very organization he works for! Does this plot device sound similar to you? This movie is inspired by the works of Tom Clancy and The Bourne Identity trilogy. In truth, the film is so dull, so tired, and unimaginative that even if Tom Clancy were in a deep state of depression, he wouldn’t have written a story as bad and lame as this one.

J.P. Davis wrote the script, and the story that this screenwriter provides is based on the action-thriller genre, but I’m curious to find out what happened to this film once production began. The action sequences themselves, and there are very few, are weak executed, poorly choreographed, and make you want to shed a tear for how depressing it looks. Chris Pine and Ben Foster starred together in Hell or High Water, a brilliant crime drama, and once again, they work together, but they look tired and disinterested in their characters. They truly give it their all, but I want to know why these two actors, especially Kiefer Sutherland, would be involved in this egregious film!

Director Tarik Saleh makes The Contractor into a poor man’s attempt at recreating the iconic status that is Jason Bourne, and he fails miserably. The Contractor is a movie that has some ideas but doesn’t do anything in exploring them or having the characters engage in thoughtful conversation. People run around with guns; they shoot each other, blah blah blah. Yeah, this movie sucks the enjoyment out of action thrillers that it amounts to nothing more than an embarrassment.

The Contractor is the perfect example of how good actors can’t elevate a movie whose script is so piss poor that action lovers will be hard-pressed to find any sense of joy in watching this movie. I will give credit to Pine and Foster, but that’s about it. The action is boring, the story is your standard by-the-numbers government action flair with no bite, and in all honesty, it’s so dull that you may cry to feel anything while nothing happens on the screen. It would’ve been a better experience if the theater remained dark, and the projector somehow destroyed the film before it even entered a second into my brain.