The wait is finally over and Diana has returned! After the release of Wonder Woman (2017), fans of the DC Universe were thrilled to have a movie that could finally spar against their rivals-Marvel. Gal Gadot was a perfect choice to play the title character and she returns to the big screen with Wonder Woman 1984! Originally, due to release in November of 2019, the film suffered countless delays and with the pandemic essentially shutting down the movie theaters, the fans have patiently waited to see our Amazon princess again. With the pandemic putting the world at a stand still and leaving us with an utter sadness, WW84 is the movie to see to bring our spirits up and have us cheering once the movie ends leaving us eager for another entry.

The movie takes place during the ending times of the Cold War-1984. Diana (Gal Gadot) has adapted well to life and assists in running the Smithsonian in Washington D.C. She works endless hours while stopping crooks from harming others in her off-duty hours. A great deal of time has passed since the events of the first movie and still her heart is broken from losing Steve Trevor (Chris Pine), the one man she fell in love with. She doesn’t date and hasn’t found a new man in her life but puts her focus on her work instead.

Diana meets a co-worker named Barbara Ann Minerva (Kristen Wiig), an archaeologist and gemologist who’s working on some artifacts that were stolen in a robbery and later recovered by the F.B.I. She’s an awkward woman who doesn’t seem to have much going for her in life besides her work. She’s nearly invisible to her colleagues and has no such luck with finding a suitable man. Wiig is best known for her comedic work and boy does she deliver on the laughs but also portrays her character very well. 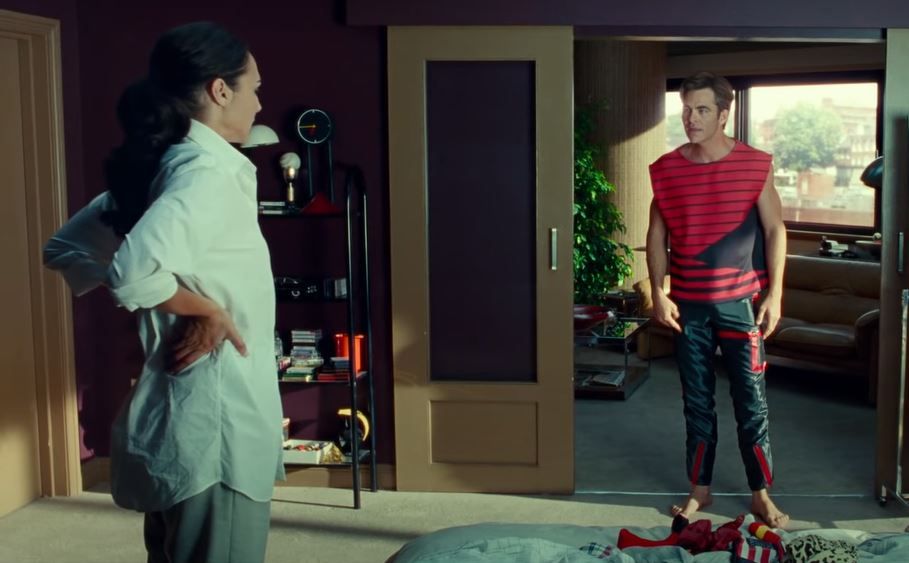 Another character is a man named Maxwell Lord (Pedro Pascal). A television personality who will sell anybody anything in order for their dreams to come true. He’s infatuated with himself and finding the greatest success that it’s almost unbelievable that he’s a complete failure at everything he does. Maxwell, Barbara and Diana all have a connection and that is in the mysterious artifact that’s among the list of items needing to be examined at the behest of the F.B.I. Without revealing too much here, I’ll give you a brief preview. This stone has the ability to grant wishes to whoever it comes into contact with, but there’s a catch; it acts just like a Monkey’s Paw; something must be taken in return. If you’ve seen the previews, and I’ll bet you already have, then you’ve seen Steve return in this film. Yes, Steve Trevor is back from the dead and with the realization that he’s entered a different era from which he comes from, he’s thoroughly confused and amazed at what he sees!

The moments between Steve and Diana are what made Wonder Woman such a joy to watch and seeing them together again is even more special. Patty Jenkins (director and co-writer of Wonder Woman and WW84) does a good job of blending action and comedy in the same realm. I laughed a lot during this movie and the action is quite impressive. Aside from all of that, the movie’s main theme is greed and love. What will we do to get them both? Which are more important to attain? What are the consequences of our choices? These are just some questions that were floating through my mind during the screening.

Maxwell is the main villain but not in the sense of a murderous fiend. No, no. He’s more of a coked out man who’s bargained for more than he can handle and seeing Pascal bring this character to life reminded me of the greedy character of Gordon Gekko from Wall Street, except multiply the insanity by ten-fold. Kristen Wiig is hilarious but adds some true dramatic heft to the film while Gadot and Pine shine together on the screen in wonderful fashion. Hans Zimmer upgrades the musical score but I think we can admit the theme from Rupert Gregson-Williams really got us excited. The movie may feel a bit overlong, but in the end, I was more impressed with the villains in the movie than any of the action. I enjoyed their characters and ultimately their motivations far better than that of Ares in the previous film.

WW84 is a blast from start to finish. The action is exciting, the special effects are astounding and the plot was quite exhilarating I might say. Sure, it’s a sequel but feels like a standalone film in some ways. We do get to see some familiar faces, some that might take you by surprise so be on the lookout. After a tumultuous year, it’s nice to close out the year with a movie that fills our hearts with excitement, joy, and the feeling that no one forgets, remembering the people you love. Wonder Woman 1984 is an exceptional film that isn’t about action or explosions, but instead a movie about a woman trying to make a small difference in a big world.

Whether you see the movie in theaters or at home, be sure to mark your calendars for Christmas Day because that’s when our Amazon Warrior Princess is back in action. If you enjoyed Wonder Woman then you’ll cheer for this one too!