This 2020 release, the directorial debut of Gerard Bush and Christopher Renz, has gained mountains of criticism online for its failure as a horror film. Many are saying it’s a Jordan Peele Get Out wanna-be, it failed to elicit the horror genre, and that it was just too explicit in its messaging. There is no need to look deeper than the surface level of this film to realize that its explicit confrontation with racism is the horror of the film. It doesn’t let the viewer look away from the terrifying reality of systemic racism and the scary realization that the narrative of the film is no so far-fetched in modern America. This visceral quality of the film is what many people are claiming is its short-coming in comparison to Jordan Peele films. Racism and social justice issues coming to the forefront of Antebellum does not make it worse than any Peele film- it just makes the viewers who are implicitly racist more uncomfortable than Peele’s did.

This film cannot be written off as just another innovative horror film; it speaks directly to the issue of Black lives being put through violent institutions for the sake of white enjoyment. Veronica Henley is a revolutionary academic, who has published work and thoughtful lectures about radical change in American society. She leaves her family for a weekend to present at a convention in New Orleans, Louisiana. While there, she is kidnapped, waking up on a plantation, forced to keep quiet and perform the duties of enslaved peoples. This mock plantation is revealed to be the intensive cosplay arena of white supremacists who fantasized about existing as Confederate soldiers and living in the time period when slavery was still legal. Veronica hatches a plan for escape and is able to take revenge on the racists who trapped her there and subjected her to rape and physical abuse.

Antebellum is really radical in its narrative, which is why many missed or disliked the point it was trying to get across. It takes the traditional slave narrative, which has been exploited time and time again in films and puts its own twist on it. The term trauma porn is used to describe the enjoyment that viewers and people gain from watching content that inherently depicts traumatic events and histories. This trend can be seen in so many films about Black lives from Django Unchained to The Help, both of which revolve around the oppression of Black people, just for the shock value and marketability of it. 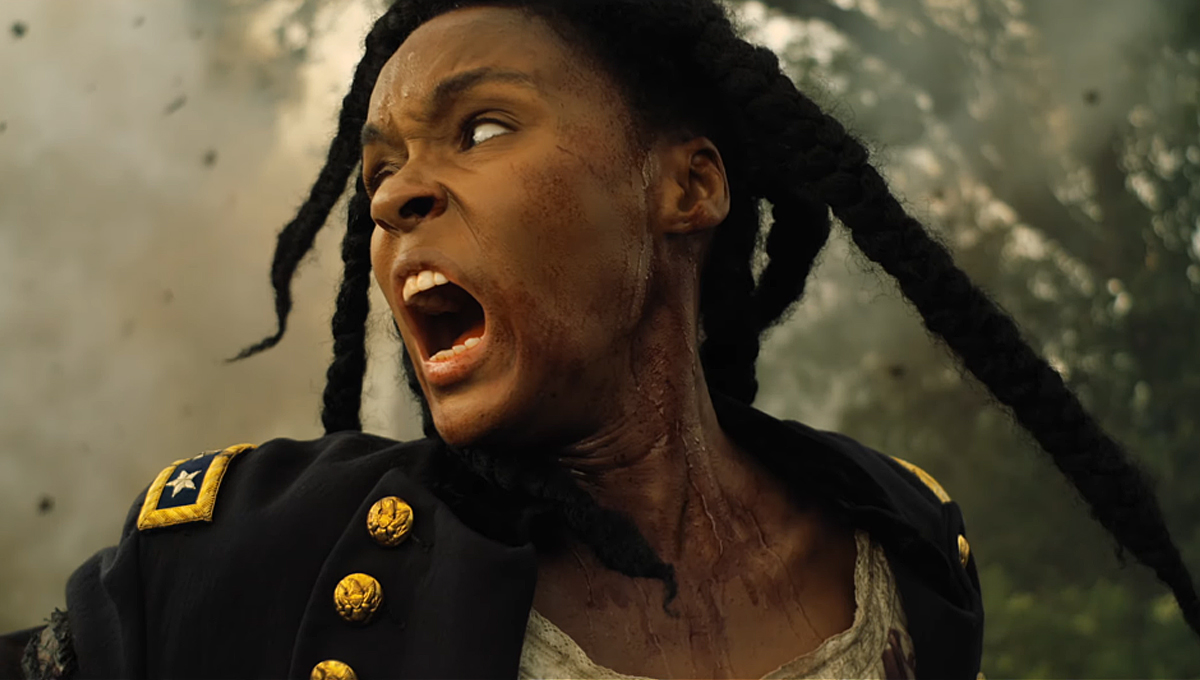 From a feminist perspective, the film establishes Veronica as a powerful and intelligent leader with many dimensions to her characterization. Her character personifies a successful feminist portrayal of Black women in film. However, the one issue that does arise with her persona and narrative in the film is the fact that she is forced into and demanded to fulfill a conventional hero arc. In some cases, hero arcs simply make sense in Hollywood cinema; classical Hollywood films are formulated to revolve around these protagonists. But in the context of Antebellum the hero arc makes much less sense and seems to be a bit unnatural. The film’s messaging is radically anti-racist and does not fit into many conventions of traditional Hollywood film, making Veronica’s heroism seem out of place among all the other aspects of the movie which push the envelope. Her character takes down the entirety of the white supremacist operation which captured her and brings justice for all the people kept at the plantation. This is unrealistic for one person, no matter how smart or morally just they are, to achieve.

It is more apt to critique the industry itself for its demands for convention, than to blame Antebellum as a singular text within that industry. In order to be able to qualify as a blockbuster, every film has to follow a certain format. Antebellum had the opportunity to be a really revolutionary film, both in terms of its narrative and technical execution, but couldn’t fill that potential due to industry demands. No one can blame the creators of Antebellum for wanting their film to succeed; everyone needs to make money in order to survive. From my perspective, it is a shame that the industry doesn’t make room anymore for the success of films that push the envelope.