High School is a time of adventure, fun times with friends, and the experiences of relationships that can lead to either heartbreak or joyous moments. Fast Times at Ridgemont High explores the lives of several teenagers who are going through those exact moments. Being my first time seeing this film, I was laughing almost from the opening of the film. From its hip soundtrack, colorful characters, and memories of when I was in High School, this film felt exactly like National Lampoons Animal House. While the film does venture away from a story arc, and puts more focus on the daily lives of the characters who attend Ridgemont High, — that we can assume is in California despite the film never mentioning where the film takes place — one thing to mention is that this film is often considered one of the first movies about High School, and being that the film has no firm focus on its plo,t it reminds me of my own high school days.

It’s the 80s and the seniors are ready to graduate and seek the adventures far beyond the realms of book reading and quizzes. Stacy and Linda (Jennifer Jason Leigh and Phoebe Cates) both work at a pizza parlor in the local mall and discuss all things in the topic of sexuality and boys. Stacy is only 15 and is eager to lose her virginity after hearing about all the good things from her friend Linda. She meets a man named Ron Johnson and she lies about her age. He’s 29, handsome, and is an audio consultant. Not thinking about anything else, she has a one-night stand with him. Although she is disappointed that he never calls her back she still enjoyed her time and talks about it with her friend.

The most famous character in the film is without a doubt Jeff Spicoli (Sean Penn). He smokes marijuana with his friends, has some risqué photos in his bedroom, and is all about that surfer’s life. He’s the guy that takes life easy, nothing bothers him, and even has unique teacher-to-student moments with his history teacher Mr. Hand (Ray Walston). Other characters to mention is Brad (Judge Reinhold) who is in love with his 1960s Buick LeSabre, gets tossed around from job to job, and has a fantasy moment that is a staple in classic film scenes. We also have Mark “Rat” Ratner, who works a movie theater across the way from the pizza parlor. He likes Stacy but is so shy that he seeks the help from Mike Damone (Robert Romanus) who scalps tickets and has a voice that really fits the character.

Amy Heckerling (1977’s Getting It Over With short film and AFI Thesis Film) was the one chosen to helm this project with Cameron Crowe sitting in the writer’s chair shortly after his book Fast Times at Ridgemont High: A True Story was published in 1981. David Lynch (Twin Peaks and Blue Velvet) was the original choice for the film’s director, but according to him, it wasn’t his style. Then at 22, Crowe decided to return to High School in an undercover mission as part of research for his book. The film rights were sold even before the book was published. Andy Rathbone (author of For Dummies books about computers) is based on Mark Ratner’s character. 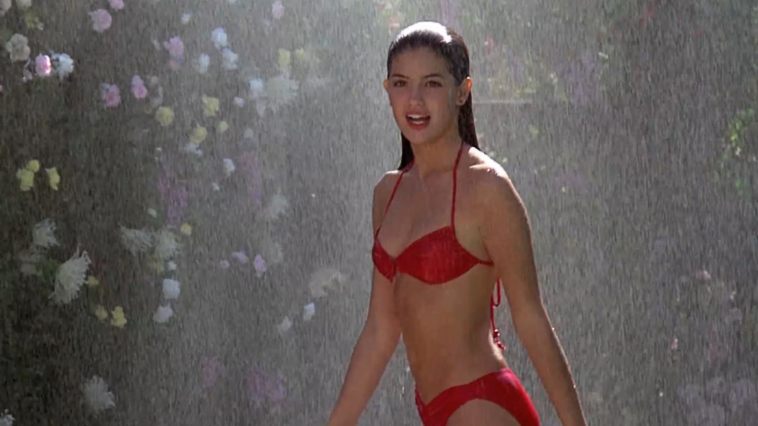 While watching the film there were memories that struck me back when I was in high school. The relationships, the jocks, the students who caused trouble and made the us love them for it, it all came back to me. All I could do was smile in return. Despite the popularity of the film, even though it was distributed in only 500 theaters at its release since Universal Pictures didn’t think it was going to be a success, it is now regarded as a Cult Classic. In 2005, Fast Times was selected for Preservation in the United States National Film Registry by the Library of Congress as being “culturally, historically, or aesthetically significant.”

The reason that the film was thought to be unsuccessful was largely due to its sexually explicit subject matter and a cast of unknowns who later became big stars. This also marks the first appearance of Nicolas Cage in his debut film appearance. Although he has no lines of dialogue and is only seen for a second, it also marks the first and only time he is credited as Nicolas Coppola. Other actors who make appearances include Eric Stoltz, Anthony Edwards, and even Forest Whitaker. Although these actors are barely in the film, Whitaker takes the cake as Charles Jefferson, a football player who steals the show during a game and goes after everyone when something happens to his beloved car. It’s funny, memorable, and again brings me back to the old days.

There are other moments that are fun to recall. Spicoli’s dream sequence, the pizza delivery scene that ends with some sadness, the ending robbery scene, the moment when Stacy and Mark almost go all the way, and to end it all, Fast Times ends the exact way Animal House did. We learn what happened to the people that we got to meet. Other moments include scenes of iconic lines such as, “Hey, Bud, let’s party!”, “That was my skull! I’m so wasted” and of course, “Oh gnarly!”- All said by yours truly, Spicoli.

What you may not know is there was a scene filmed where Stacy and Mike are stripping off their clothes prior to having sex and the camera shows full frontal nudity of both Stacy and Mark. This scene was cut to avoid the “X” rating. Another scene that was changed was when Stacy and Linda are discussing a certain sexual topic and talk about it while in a hot tub and both of them are naked. This scene was removed for the exact same reason. Phoebe Cates was also nervous about her fantasy sequence where she takes her top off because she was afraid that neighbors who be looking while the film was shot.

High School is a time of learning about yourself, fooling around with others in good ways and bad, and a time when we remember when we were young. Fast Times doesn’t hit the high notes of Animal House but in some ways, it’s a lot like it. It’s funny, raunchy, and has touching moments that may surprise you. Fast Times at Ridgemont High was released on August 13, 1982. The 35th anniversary of a classic comedy still shines and will bring a smile across your face. A joyous time with memorable performances and one of the best works from Cameron Crowe.

Fast Times still holds up as a comedy by even today’s standards in ways that reflect my personal taste in comedies. I don’t enjoy watching comedies that are forceful with their jokes especially the sexual humor. I believe that comedy should come natural and feel as if the joke had a reasoning behind it. With such comedies as Neighbors (2014), Dirty Grandpa, and most recently Baywatch, those feel don’t have the cleverness of their jokes and instead rely on gross out humor to try to get a laugh. For me, comedy is difficult because it needs to feel authentic and not forced. Fast Times and Animal House still rank as one of the funniest movies I’ve seen and will continue to do upon multiple viewings; something that seems to be lacking in the aforementioned titles.