It’s awesome, go see it. Just go. Right now. The only thing that you need to know about this film is that it’s a perfectly calibrated machine, not just one of the best movies that you’ll see this year but also one of the funniest and most punch-you-in-the-gut viscerally affecting. Beyond that you don’t need to hear another word from me. The only people who I can possibly fathom not recommending this one to are those with an extreme sensitivity to violence or at immediate risk of cardiac arrest. If that’s not you, why are you still reading this? Why are you not on your way to watch Wild Tales?

Hmmm? Its limited release engagement in the States doesn’t include a theater near you? Oh. Okay, well… in that case, I suppose we can talk a bit about what makes this film so great. 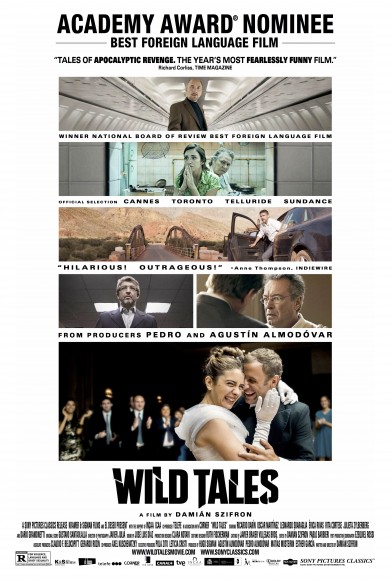 Wild Tales is an Argentinian anthology film from director Damián Szifrón. It presents six stories over the course of two hours, each fully formed and independent from the others but threaded together by a set of common thematic concerns and plot similarities. The tales run the gamut from drama to romance to almost thriller-like levels of suspense, but the main operational form and strong suit for the film is pitch-black comedy. Each of the short stories deals, broadly, with the ideas of fury and vengeance. More concretely, each film takes a character or characters, puts them in some sort of pressure cooker scenario, and then steps back to wait for the moment when some part of the equation snaps.

The resulting stories are masterworks in short-form storytelling, each one packed to the brim with surprises, twists, and “Oh My God” moments. Part of what makes them work is that Szifrón and the rest of the filmmakers have a unique ability to pick scenarios that just come with a built-in sense of suffocating suspense. Consider, for example, the third story, perhaps the most pulse-pounding of the lot. It opens with a rich yuppie driving a whiz-bang spots car down a desolate highway, the kind where you don’t even care about the speed limit because you might go hours without seeing anyone else. Unfortunately, he does run into someone, a roughneck driving a very beat-up, and very slow, junker. After a few moments of frustrated tailgating, the yuppie pulls ahead, shouting obscenities as he goes. Some undisclosed amount of time and miles later, the sports car gets a flat tire. The yuppie and the audience both immediately realize that it’s only a matter of time before the other, slower, insulted driver catches up with him. But how long? Tick, tick, tick… It’s not just that each piece has an ingenious set-up, though; it’s also their steadfast commitment to take them to their most insane and extreme conclusions. A good sense of escalation, where a situation is made tenser and tenser, is a surprisingly scarce screenwriting skill. This film has it in spades. For example, the second story centers on the sole waitress of an all night roadside diner who suddenly finds the notorious usurer who drove her father to suicide years ago stepping into the restaurant. The on-duty cook, the only other person on the premises, says they should kill him for his past crimes, but the waitress is hesitant.

That is already a corker of a set-up, the kind of thing that Alfred Hitchcock would have had a field day with, but the film doesn’t stop there. Instead, as the two women run through the if-it-were-done’s of the guy’s murder, the usurer unleashes a torrent of such incivility and malfeasance that it becomes impossible to not hate the guy. Every time he opens his mouth, some wondrous new form of impertinence, entitlement, privilege, sexism, insolence, impatience, vulgarity, or plain old fashioned disrespect pours out. He is so despicable that after a few minutes the tension comes less from the moral question of, “Should they kill him?” and more from a throbbing sense of, “How long can anyone be alone with this guy and not kill him, moral justification or no?” It’s only after that dynamic has been played out in full that the film introduces a new person into the scenario, and the story effortlessly switches gears into a new form of tension. Wild Tales is a film that’s packed full of surprises, but perhaps the biggest one is that there’s not a weak link to be found in the proceedings. Anthology films, even ones with absolutely outstanding work like Paris Je t’aime, are always dragged down by their duds, but Wild Tales has no section that falls flat on its face. Certain stories have a few oddities that make them feel different from the group, but that just adds flavor. Yes, the first story (about a group of airline passengers who discover a surprising link that joins them all) is conspicuously shorter than the rest, but that just means that the filmmakers didn’t feel the need to dilute the flashbang grenade of their opening joke by having it outstay its welcome. Likewise, the fifth story (about a rich father scrambling to cover up his son’s drunk driving accident) feels more soberly serious than the other five pieces, but that just increases the potency of its few precisely chosen gallows humor jokes.

Even so, these are considerations that pop into your mind only after the film is over. As the stories unfold you just hang on for dear life, pausing only to gasp or laugh in stunned horror at whatever violent, vulgar, or sinister twist has just been unleashed on the who’s who cast of Latino filmmaking. Simply put, there is no department in which this film does not excel. The writing is sharp and sparkling, featuring all manner of baroquely creative cursing (the nuance of which is, sadly, not always served in full by the film’s English subtitles). The camera work by veteran DP Javier Juliá is fluid and expressive. The original score by Oscar winner Gustavo Santaolalla is understated but perfectly couches all of the film’s emotional highs. I could go on, but I think you’re starting to get the picture. I’m not even going to tell you what happens in this story. This one you have to see for yourself.

And if I could give it a 6, one for each of its stories, I would. Wild Tales is ambitious in its scope, ingenious in its approaches, and adroit in its executions. There’s not an ounce of fat or pretension in it, just a set of tales neatly calculated to keep your heart pumping and your jaw hanging. I saw the film in a packed screening room and there was nary a moment when the crowd was silent – not because of mid-film conversation, but because of how often the film was able to wring out gasps, chuckles, or (surprisingly loud) expletives. This is top-shelf material to be sought out as soon as it’s playing anywhere near you.