Everyone’s experience with the Covid-19 pandemic will vary and many stories will trickle down for the future generations to better understand all that we went through during this trying time. The struggle of forgetting your face covering, or keeping a safe distance from others and staying home majority of the time to either surf the internet, get involved in Zoom meetings or running up your electric bill by watching television all day. Personally speaking, this pandemic hasn’t really changed much for me. I’m still working, I rarely left the house to mingle with others and I rather enjoy spending time in my apartment. Locked Down is a film that explores the problematic lifestyle of being at home all the time and under orders from the Government, you can only leave your home for essential means. Plus, there’s a heist element in the movie as well? I guess.

This movie showcases the breaking down of a relationship, the inner thoughts we have and, at times, our mental status in which our normal everyday routine has been altered into a state where chronic boredom runs amok. The film begins with a shot of a street in London that is completely empty. With shots to open a film such as these, you’d think we’d be watching a post-apocalyptic film or perhaps a zombie flick. Nope, we are in the midst of a nationwide lock down due the Covid-19 pandemic and everyone is inside trying their best to stay safe and symptom free.

The film’s primary cast is Anne Hathaway and Chiwetel Ejiofor as Linda and Paxton.  They are a married couple but their relationship is essentially void. They feel nothing for each other even though they live in the same residence. They sleep in separate bedrooms and avoid seeing one another throughout the day. Linda works from home now as the CEO of a well-known fashion company named Harrod’s. Due to the increase risk of looting and rioting, the company is looking to move its merchandise to a more secure location. Paxton, unhappy with his life, can only find work as a delivery driver due to a felony arrest from years prior. Paxton was once a thrill in Linda’s life and wouldn’t blink for a moment to take a chance and just run towards the sunset. That time has passed and his life now is one of disappointment and regret.

Paxton’s depression has played a major role on his health and life. He’s not sleeping and is irritable while Linda takes up smoking and drinking wine during her business meetings. Anyway, as the movie progresses we learn that these two characters actively engage in talking of committing a crime and that may be the lure for some people to see this movie; but to call this a heist film is the equivalent to saying that The Lion King is a National Geographic documentary. It appears that the movie has a sense of identity loss because it doesn’t seem to know what it wants to be. For most of the film, we are subjected to viewing this couple’s day to day activities and how there relationship has slipped past the point of no return. The longer the film went on the more disinterested I became.

I will give credit to Hathaway and Ejiofor for their great chemistry together. They felt like a couple who have seen their share of brighter and sunnier days. There is a good amount of comedy in the film but overall the movie was just dry. There was no bite, no excitement and no thrill either. Perhaps that was the point, to remind us that our lives were taken away when the pandemic took over the world leaving us to hide away in our homes, shut out from the rest of the world. In speaking of the “heist” there’s a bit more to be desired and once that part of the story concluded, I felt nothing in the end. 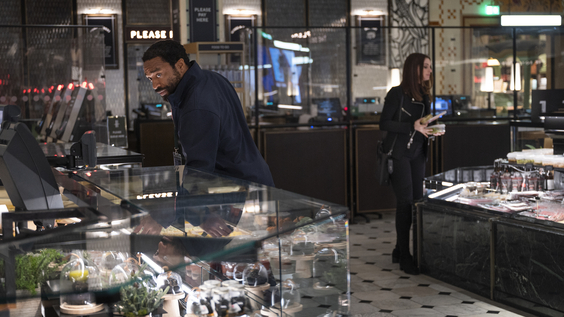 Locked Down features a good cast and fine direction from Doug Liman, but sadly the film has no clear identity. We have the lure of a heist that feels like a third act that was thrown in at the last minute and a film that focuses on the failing relationship of one couple and the restraints the lock down has on us all. I’m fine with the latter but in the end Locked Down is a boring movie that less involving as it will probably remind you of how your life is going at the present moment. I’m fine with a film discussing the pandemic but this will likely leave feeling as if you wasted your time when you could’ve watched something more exciting on Netflix or the streaming service that this is on…HBOMAX!