What do 1998’s Godzilla and Dragon Ball Evolution have in common? They are both films based off of Japanese properties that the United States completely bastardized to the point that the creators of the original properties had to come out of retirement and make something new to cleanse our eyes. Yes, unfortunately I’m tackling Roland Emmerich’s “adaptation” of Godzilla. Oh goody.

Even though this movie came out while I was still a baby, I could still feel its effects years down the road. I had an old Godzilla McDonald’s toy that I would play with for hours on end and would regularly see promos for the film’s excellent cartoon continuation: Godzilla: The Series. SIDE-NOTE: you should actually watch this cartoon online if you have the chance. Not only is it an improvement over the movie with an interesting plot and fun characters, but the animated Godzilla actually fights other kaiju-inspired monsters. It’s pretty good.

The movie, however, should be avoided like the plague. Or in this instance, like the coronavirus: stay six feet apart. 1998’s Godzilla fails in (almost) every aspect of filmmaking imaginable, with the exception of visual effects. Weirdly enough, a good chunk of the visual effects for this movie still hold up, and that’s because they did a lot of them practically. Any full CG shots, however, look more cartoonish than the Whedon Cut of Justice League. Yeah, they’re that bad. While the 2014 Gareth Edwards-directed Godzilla got criticism for focusing too much on the human characters, you could at least argue that they had a reason to be there. The human characters in THIS Godzilla feel atrociously out of place. Matthew Broderick’s Niko Tatopoulos is a really pathetic character and his last name is just a failed attempt at being comedic. And yes, I had to Google the name just to spell it correctly. But it’s not just the name and choice of actor that fails the character; it’s that Tatopoulos feels too uninteresting and goofy for his own good. He’s supposed to be an intelligent scientist but comes across more like the quiet, smart kid who got paired up with the dumb cool kid and only does what he does because he’s scared of getting picked on.

Then there’s Maria Pitillo. Godzilla is the only movie of hers that I have ever seen and it’s a horrible performance. She is completely unconvincing as reporter Audrey Timmonds and does things so needlessly cruel that you wonder why Niko even ends up with her. She shoves her way into Niko’s life, even when he made it clear he does not want her there, steals his stuff and slanders his name, then acts like all this is his fault. It’s quintessential bad journalism cliches and makes her a far worse character than Godzilla, who literally stomps across Manhattan, and by accident, mind you.

Everyone else, with the exception of two characters, is not nearly as bad, but still pretty bad. Simpsons actor Hank Azaria, who’s usually so good in everything he’s in, feels out of place here. You look at him and you can clearly tell that he has no idea what he’s supposed to do. Kevin Dunn shows up and does his best but he’s more convincing in Transformers than here. The same can be said for Harry Shearer, Doug Savant, and Arabella Feld. No strong performances here.

The story’s also complete nonsense. Godzilla arrives in New York to…well..the inference is that Godzilla, who’s female by the way, wants to find a place to lay her eggs. Oh, and she can also somehow disappear out of thin air, leaving the military unable to find a four hundred foot tall lizard in New York. And speaking of the military, they do more damage to New York City than Godzilla. They blow up buildings, fire into crowds, launch submarines in the Hudson — which is bull crap by the way — and don’t listen to the smartest person in the room. But since this is Godzilla, the smartest person in the room is still an idiot. It also straight up rips off Jurassic Park in its third act. 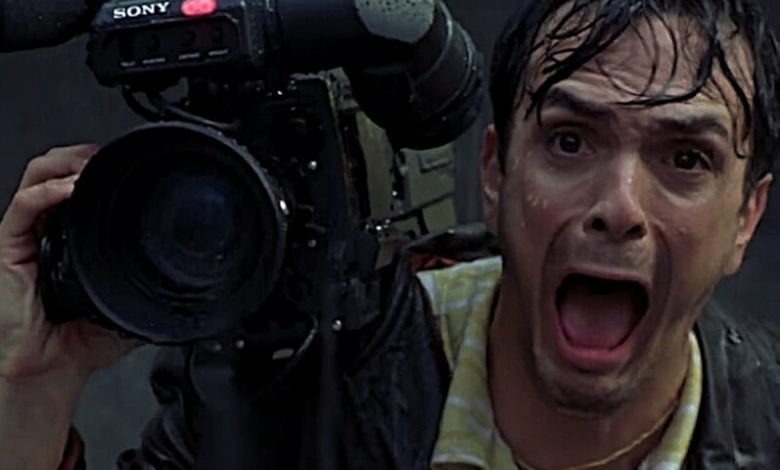 Yeah, Godzilla’s babies hatch and the main cast must find a way to blow them up. They look cool as they’re practical effects, but the rip off is so blatant that it makes you wonder if the screenwriters even cared in the first place. Then there’s the ending where we find out “oh no, one of the eggs survived and is about to hatch.” No one cares about that, unless you watched the animated series pilot. Then the payoff is surprisingly good.

I also feel obligated to mention this since Honest Trailers brought it up, but Godzilla is REALLY dated. Some movies can move past their date and still become classics, like Pulp Fiction, The Breakfast Club, Forrest Gump and Shawshank Redemption, But Godzilla cannot move past this. There are some pieces of product placement that the new generation won’t understand. Cingular? Fruitopia? Blockbuster? Okay maybe people will remember that last one, but the majority are still stuck in the 90s.

Half the technology in this film are so dated it feels cringey. Hank Azaria plays a cameraman, and at one point, he runs out of tape for his big camcorder and has to quickly replace it. Yeah, that’s kinda bad. When the main cast is stuck and need to call for help, they use a landline but the line is “busy.” Okay, but the “it runs on an internet” line won’t be looked at fondly. And then there’s this gem: “This is the worst tragedy since the World Trade Center bombing.” Yeah… I’m not going to even touch that one.

The point is that Godzilla’s rewatchability factor was ruined by all these dated terms. But the worst factor is that Godzilla, one one of the most iconic movie monsters ever, looks like a mentally and physically deformed iguana. Godzilla needs to look like he did in the Legendary Monsterverse movies; big, tall, loud, and F***ING SCARY. The Godzilla couldn’t even frighten my dog, and he’s scared of absolutely everything. The design was completely misguided, as well as the rest of the movie here.

All that being said, this movie does have a couple saving graces, in the loosest way possible. Legendary film critics Gene Siskel and Roger Ebert are icons in the film community, but they were infamously tough on Roland Emmerich’s 90s movies like Stargate and, believe it or not, Independence Day. So what’d he do? Well, he made them characters in Godzilla. Mayor Ebert is an ineffectual baffoon and his aide, Gene, is a “yes man” lackey. Despite how on-the-nose this is, it’s actually really entertaining, kind of like watching a rap battle between two very old men. And it also helps that Mayor Ebert’s actor Michel Lerner looks stupidly like Roger Ebert and does his absolute best to convey Ebert’s demeanor.

And then there’s the absolute best part of this movie: Jean Reno. Much like Tim Curry, Reno is that type of character actor where, regardless of whether the movie is bad or great, he’s usually the best part. He plays an over-the-top French agent investigating Godzilla and everything he does is just so French that it’s pretty much a caricature. Yet Reno plays the caricature so effortlessly that it’s honestly just a joy to watch. It’s like he knows the movie sucks, so he’s playing it up in hopes the audience will have more fun. Props to you, Jean. Props to you.

However, Mayor Ebert and Philippe Roache can’t save this movie from being, to borrow Ebert’s trademark gesture, “a major thumbs down.”

Godzilla is a BAD movie, but has just enough to keep it from being the worst movie ever made, mainly thanks to Jean Reno and Michael Lerner. My advice: watch the animated series but stay away from this garbage. You don’t need to see this movie again- it should just stay in the 90s where it belongs.

Though if you really want to risk it, just watch this version of Godzilla get his ass whopped by the OG Godzilla in Godzilla 2000. It’s great.