Vivarium: An Analysis of Suburbia, the Nuclear Family, and Capitalism - mxdwn Movies

Vivarium: An Analysis of Suburbia, the Nuclear Family, and Capitalism

Newly available for streaming on Amazon Prime, Vivarium puts the monotony of suburban home life that many have been enduring during the current pandemic into a whole new perspective. However, despite this seemingly unremarkable premise, the film is strikingly shot and will easily throw any viewer for a loop. Through its aesthetically pleasing examination of the concept of suburbia, Vivarium critiques the modes that capitalism uses in society to maintain its footing.

The plot of the film is relatively simple; a young couple, recently married, is looking to buy a new home together. Groundskeeper Tom and school teacher Gemma head over to a local real estate office, one that is remarkably pristine and are approached by the sole employee, a slightly-off but very attentive real estate agent named Martin. He tells them about a new development that lies the perfect distance from the city named Yonder. The couple follows Martin out to the development and are stricken by the vast quantity of identical looking houses. As they tour house number nine, the two wander into the backyard, and are terrified to realize after a moments passing that Martin has disappeared, leaving the two in the immaculate, fully furnished home. Tom and Gemma jump in their car and start driving to leave the community, only to realize that each path they try leads them back to house number nine. In disbelief, the couple refuses to give up, driving in loops around their labyrinth of a neighborhood until their car runs out of gas.

Finding themselves stranded in the eerie development, the couple is jarred to find a box full of rations of food and supplies delivered to them, despite their completely desolate, unpopulated surroundings. Only a few days after that they are even more shocked to find another delivered box containing a live baby, along with the instructions to raise the child if they ever want to escape. From this plot point on the conventions of suburban life that were culturally established in the 1950s take hold of the characters and through the twisting narrative the faults of suburban life, the nuclear family, and the capitalist system which they serve are exposed.

Despite both Tom and Gemma’s reluctance to settle into the home that was forced upon them, they realize raising the strange baby might be their only hope. The child itself grows at an alarming rate, so that within three months’ time it has developed into a nearly ten-year-old child and is most obviously not human. Up until this point, the two approached parenting with a negligent attitude, only attending to the child’s needs when it shrieked for attention. But soon, Gemma starts spending more and more time with the child, adopting the traditional mother’s role within the nuclear family structure; feeding the child, preparing its clothes, and playing games with it. 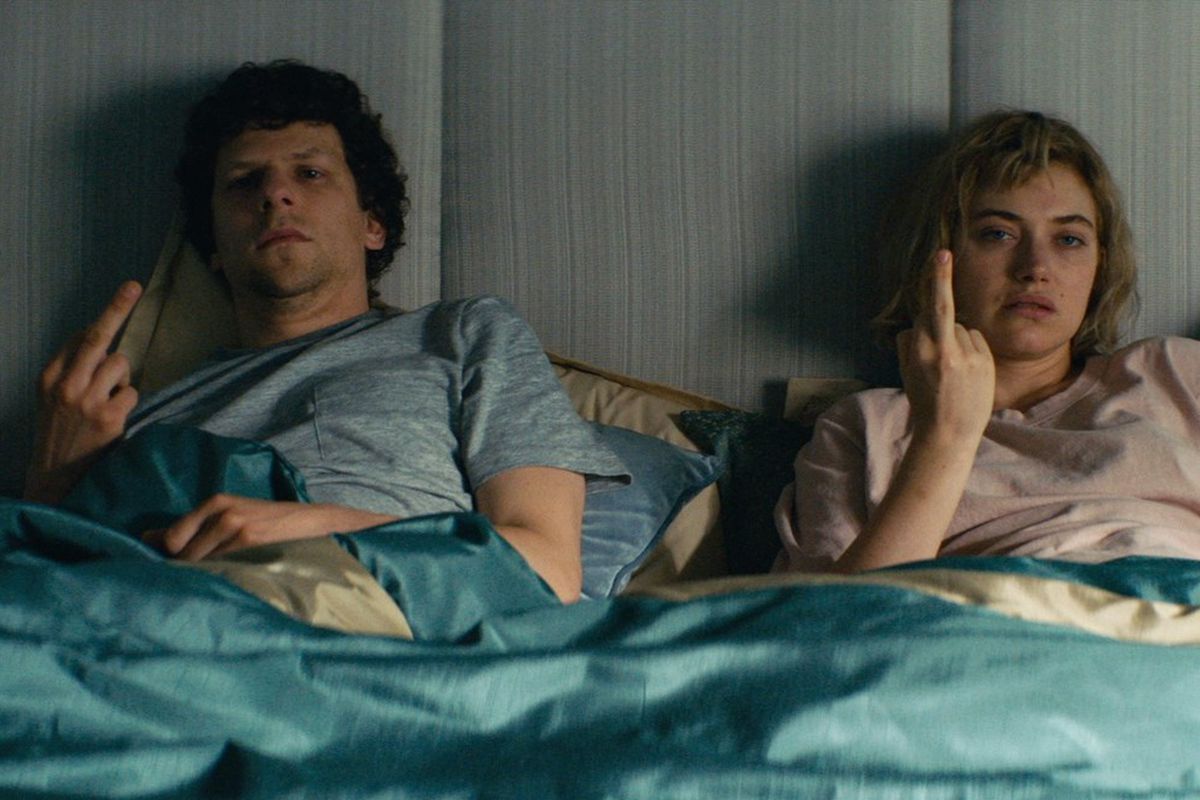 In this time, Tom takes on the traditional father-role as the breadwinner of sorts; each day he works on digging a hole, relentlessly through their front yard from morning till dusk, in an attempt to find salvation. However, it is clear that the dirt and “earth” beneath the AstroTurf yard is artificial, matching the rest of the family’s surroundings. Each cloud is perfectly cloud-shaped, the sky is always blue and sets in the same way each night. The whole environment around them only simulates life on Earth and the human experience, but its synthetic quality begins to take a toll on the couple’s life. Tom’s mind-numbing work causes tension in his marriage with Gemma, and he grows resentful towards her as she begins to form an emotional bond with the parasitic, unearthly child, as well as causing Tom severe health problems as he digs deeper and deeper each day.

This prosthetic nature and reality which surrounds Tom and Gemma is reflective of the artificial institutions that were brought about by the popularization of suburban life in the 1950s, as many toxic aspects of capitalism became rampant in the United States. With the normalization of suburbia came the corporate emphasis on consumer culture, prompting each suburban home to “need” its own washer and dryer, television set, abundance of kitchen appliances, and any imaginable product that could be sold with the aim to “make life simpler.” The nuclear families who took to living in the suburbs were just as surrounded by an artificial world as Tom and Gemma were.

And this extent of consumer culture has only lived on and thrived into modern times, where now advertisements for superfluous cat toys can target the same customers who might not be able to afford medicine under privatized healthcare. This is exactly what Yonder represents- a meticulously crafted product meant to appeal to every want and desire of the average person, without considering what that person might actually need to live or feel happy. As a superficial concept Yonder is perfect, but once one actually has to live in it, there are very little resources available to support good quality life.

As time continues on, the inhuman child quickly reaches the cusp of adulthood and both Gemma and Tom are physically unwell. Tom passes away to health complications, and Gemma dies not much after, following her brief inter-dimensional experience that exposes the complexity of their labyrinthine neighborhood. Their non-son buries their bodies and leaves Yonder, arriving at the very same real estate office that Tom and Gemma had visited and physically replacing Martin as the storefronts only employee. Another couple walks into the office, and so the cycle repeats itself.

The implied cyclical and multi-dimensional structure of the reality of Yonder and Martin’s existence is yet another symbolic reference to the process of capitalism and the way in which the economic system takes a toll on the quality of human life. Martin’s role as a worker was propagated solely through the immense struggle of his up-bringers, who both labored themselves to death in more abstract ways. It was through their sacrifice that the ultimate laborer was born- one whose only aim in life is to find a way to replace himself, to find another cog to fill his role within the greater machine. It is only at the expense of dozens of human lives—at the expense of their mental, physical, and emotional wellbeing — that this perfect worker can even exist. All of this goes back to the main point of the film; human beings need more that products and labor to be healthy and be happy in their lifetime. If their sole purpose in life is to work a job to have a family to raise a child to grow up and get a job and follow the very same path, then their lives will be ones with very little emotional value, as seen by the digression of Vivarium’s lead characters. To be an insignificant part of a capitalist machine is an endless cycle of small deaths which no one wants or asks for, especially not Tom or Gemma.