The World Viewed Through a Different Filter. Revisiting the Cult Classic ‘They Live’.

If this pandemic has taught me anything, it’s that advertising and the consistent use of urging all of us to buy things we don’t need will continue until the end of time. It doesn’t matter if it’s a national health crisis or a worldwide pandemic, as long as you have money, the advertising will never end. And with that, I was reminded of something. That cheesy movie from John Carpenter-They Live. A film that examines a world seen when a filter is applied allowing the individual to see reality for what it truly is. So, how is a movie like They Live an appropriate choice to watch during this pandemic? What themes are present in the film and how have they aged? How does this movie compare with other John Carpenter films?

To put it simply, They Live essentially has no story to speak of but rests on the shoulders of a bewildering idea that gives the film the cult status it rightfully deserves. Based on the 1963 short story titled, “Eight O’Clock in the Morning” by Ray Nelson, the story itself tells of how the human race is controlled by aliens who have blended into society without the knowledge of the human race. They Live used inspiration for the story that John Carpenter would later write and direct under the pseudonym, Frank Armitage. As a film, They Live is a very slow movie that is equal parts lackluster and just plain goofy fun. 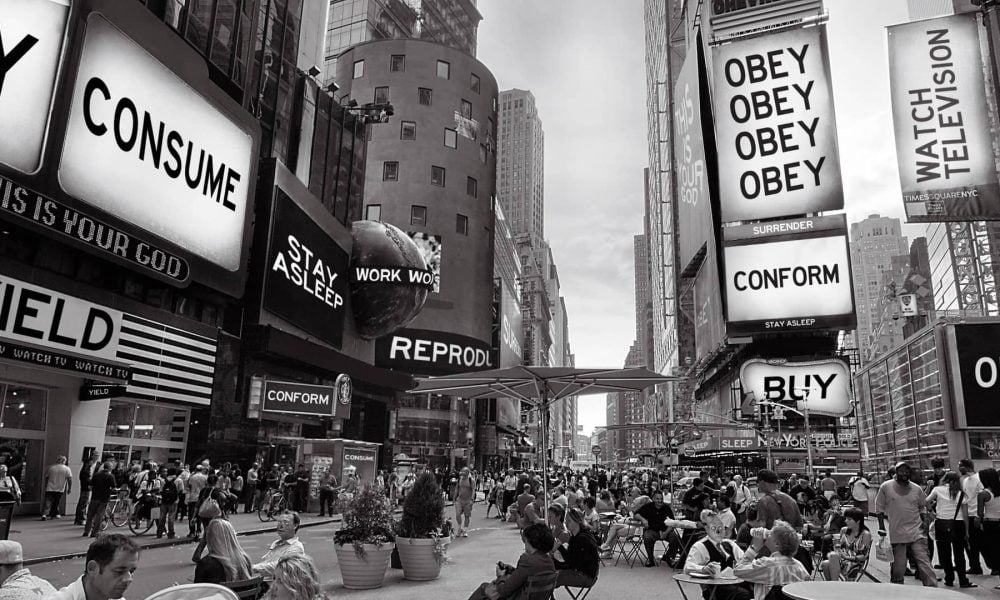 The film follows a man whose not named, Roddy Piper (the famed WWE wrestler) a vagrant who relocates to Los Angeles in hopes of a fresh start. He’s eagerly looking for work and ends up meeting a nice man at a construction site named Frank (Keith David). Frank assists this unknown man in finding work, a place to sleep and becomes his friend. The camp at which these men makes their temporary residence is a homeless camp so to speak and while not working, this unknown man, we’ll call him “Nada”, notices something strange happening at a church just across the street from this soup kitchen he’s staying at.

He decides to venture over to the church after his curiosity gets the better of him. He discovers something really odd over there but nothing more strange than numerous pairs of sunglasses. He saw some men wearing these sunglasses earlier and after stealing a box of them he takes a chance and puts one of them on. What he sees through the dark lenses is a world that stuns him beyond belief. All the billboards, newspapers, televisions and many other forms of media and information are displayed in one word text. Words such as obey, consume, reproduce and conform are just some examples. Not only is the world displayed in black and white, and littered with simple yet easily understood subliminal messages, but Nada can see people who don’t appear human. The skin on their face is gone revealing a grotesque images of a person who isn’t who they appear to be. Yet, if the sunglasses are removed, the world appears to be as normal as you’ve always known it to be.

It becomes apparent that Nada has discovered something he wasn’t supposed to see and now these odd beings know that he knows the truth. In essence, aliens have taken over the planet and have implemented themselves into society. They control all of the information we get to hear, read and see and we aren’t the wiser. Only the sunglasses reveal the actual truth. Long story short, Nada makes it his mission to kill these alien looking creatures, although they don’t share the traditional appearance. Nada goes on an immense killing spree and even enlists the help of Frank during his mission only to discover an even bigger picture by the film’s end.

They Live features a good cast and I really enjoyed Roddy Piper as the main character and seeing his surprise as the revelation comes to fruition, however, the movie is very tedious and I wasn’t very involved as the film progressed. I have to say that I implore the idea of seeing a world that’s seemingly normal only to realize that you’ve been fooled the entire time.

While They Live was a moderate success in the box office and critically not well received, They Live would go on to earn the “cult status” marker, a common theme for John Carpenter movies. While this may be considered a goofy B-movie that focuses on the eradication of aliens due to their discovery, the film is a social commentary on commercialism and the manipulation of advertising. This can be traced back to something called, “Reaganomics”, the economic policies that were promoted by President Reagan. If you take a step back from the film in order to brush up on President Reagan and his policies then you’ll see how Carpenter crafted this movie in order to represent how commercialism takes over and in the end, all the corporations want is your money. We see many examples of this when Nada views the world through these sunglasses and sees the reality of the world.

In John Carpenter’s eyes, the aliens represent the worst traits of humans- the corruption of ourselves. That can explain why the alien creatures look more like dead beings instead of the traditional “little green men.” I do love the ’50s throwback to alien themed movies but even more surprising is how They Live feels relevant today especially during a pandemic. I’m sure you’ve noticed whether by watching tv, exploring the countless apps, and all the billboards that surround us when we leave our homes. Up until recently, I’ve noticed how aggressive companies have become in order to get me to venture to there store in order to buy something I would otherwise not purchase.

Take for example, the iPhone 12. I’ve seen so many commercials for that particular product. A phone that costs more than I care to pay for and yet during a time of crisis this is what is displayed in front of me. I’ve always wondered why people gravitate towards buying the newest items even though their isn’t much difference from the last thing they purchased. You hardly see commercials for food prices going way low, or essential items needed during this turbulent time do you? In short, this is a movie that references anti-consumerism along with the over-the-top use of advertising manipulation because if you don’t buy the item then someone else will and you’ll be left far behind the rest of society.

While They Live is a goofy movie, it did spark a creative venture for some artists that credit the film for it’s unique vision of the world in an alternate state. Of course, this movie is mostly remembered for the iconic line, “I have come here to chew bubble gum and kick ass. And I’m all out of bubble gum.” Sure, it’s a cool line plus one shouldn’t forget the amazing fight sequence between Nada and Frank that lasts for an astonishing five minutes! Still, one heck of a fight to capture on film. From the throwback to the ’50s, the intricate world of these alien creatures and the conclusion of it all, They Live sure ranks with other Carpenter classics but, in my opinion, fails to be as iconic as say The Thing or Escape from New York. It’s a unique film and not surprisingly, a remake has been proposed which would focus on the story that the book told and throw away the political and satirical elements out the window.

While I’m not a fan or when films are remade, I would argue that They Live could benefit from one. The movie itself is thin on plot and I wanted to know more about the aliens and how and why the sunglasses were even made to unveil the truth. This is a movie where you’ll have more questions than answers and I think a remake could open the door for another interpretation of what this film was going for. Released in 1988, I think the film was largely misunderstood and if anyone went into the movie expecting a fun time, then they may have walked out a bit confused. They Live is a movie that makes you think and since its release, the film has aged quite well and looking back on it, it does remind us of how we can get caught up in the world of marketing, advertising and how we associate ourselves with the items we purchase. At the time this movie was in theaters, I question if the audience has those thoughts running through their minds.

Why Watch They Live?

While most of us are either working at home or living at home, They Live can a movie to re-examine again to make us question the world around us. I’m not saying this is a film to explore the political spectrum of today, but instead look at the world of material and how we can succumb to the messages all around us. Facebook knows what you look up and then goes on to suggest them on your feed. Did anyone try the impossible burger yet? Did you get that new iPhone? Do you recall the last commercial you saw and wondered if you should buy that said item? I think we’ve all experienced these circumstances before and watching They Live will make you rethink this film from the first time you saw it.

With all the film had going for it; the actors, the fascinating style of the movie and it’s engrossing premise; sadly this film was subjected to controversy and that came in the form of Neo-Nazis and White Supremacists stating that They Live was an allegory to the “Jewish control of the world.” An offensive thought no doubt which resulted in John Carpenter taking to Twitter in 2017 to denounce this claim. While no one can see the Reaganomics theme present upon their first viewing, if you read further into the production notes, you’ll see what Carpenter was going for.

It may not be the best sci-fi movie ever made, but it’s unlike anything out there either. I love the premise but unfortunately the movie is tedious to say it politely. Carpenter is a great story-teller and while They Live amazes with visual flair, it doesn’t match the concept that I was hoping for. Still, watching it after all these years does make you sit back and wonder to yourself if Carpenter was on to something that most people turned a blind eye to.