Carrie has long stood out as one a horror classic, with the 1976 film having permanently embossed the image of teenage Sissy Spacek covered in blood to the inside of audience’s eyelids. It is no secret that this ageless narrative deals with the female body and its abilities in establishing its horrifying plot.  Based on the novel by Steven King, many have raised issue with the way the noted author describes femininity and womanhood from a male perspective. Disregarding the author’s potential biases toward women and the obese, in an analysis of the film as a standalone piece, one can easily see the way in which its narrative has stood out as a feminist arc. When compared to the relatively recent release The Autopsy of Jane Doe, it is clear that both female lead characters work to reclaim their bodies through their supernatural abilities and subsequent violence.

Carrie (1976) revolves around a socially ostracized sixteen-year-old girl, whose story starts for the viewer when she gets her period for the first time in the girls’ locker room. This event proves traumatic for Carrie, as she seems to be unaware of what menstruation is causing her classmates to throw feminine products at her and to yell “plug it up!” The bullies are condemned to a week’s worth of detention, with the threat of no prom if any of those detentions are missed. Popular classmate Chris is outraged by this mandate and immediately seeks to exact revenge for the injustice on Carrie. She has a popular boy ask Carrie to prom, rigs the Prom Court elections so that Carrie will be nominated Prom Queen, all while Carrie discovers telekinetic powers in her private life. Her ultra-religious mother finds out and implicates that her daughter is a witch. Once on the stage at the prom to accept her crown, a bucket of blood rains onto the girl and chaos ensues. Carrie uses her newfound abilities to lock her classmates in the gymnasium, lighting fires, and killing her peers. At home the superhuman girl must face her pious mother, leading to a whole new struggle for survival. Carrie, having been unaware of the changes she would go through during puberty due to her mother’s devout beliefs, undoubtedly feels victimized by the onset of her womanhood. Not only is she traumatized and frightened by the blood coming out of her, she is traumatized by the actions of her classmates, who seem keen on punishing her for her lack of social graces. This narrative can be seen as a much larger statement- women are criticized for their biological functions, just as much as they are criticized for the impeccability, or lack thereof, of their social abilities. Despite her hatred of the physical, human changes that happen to Carrie in the onset of her period, it is clear that the womanhood Carrie has inherited comes with more than misogyny and cramps- her transition into her adult female form imbues her with more power than she knows what to do with. The internalized hatred of her femininity, instilled in her by her mother, is trumped by her newfound psychic capacity which gives her the autonomy and jurisdiction to incite violence and hence find a sense of justice for her social torment. 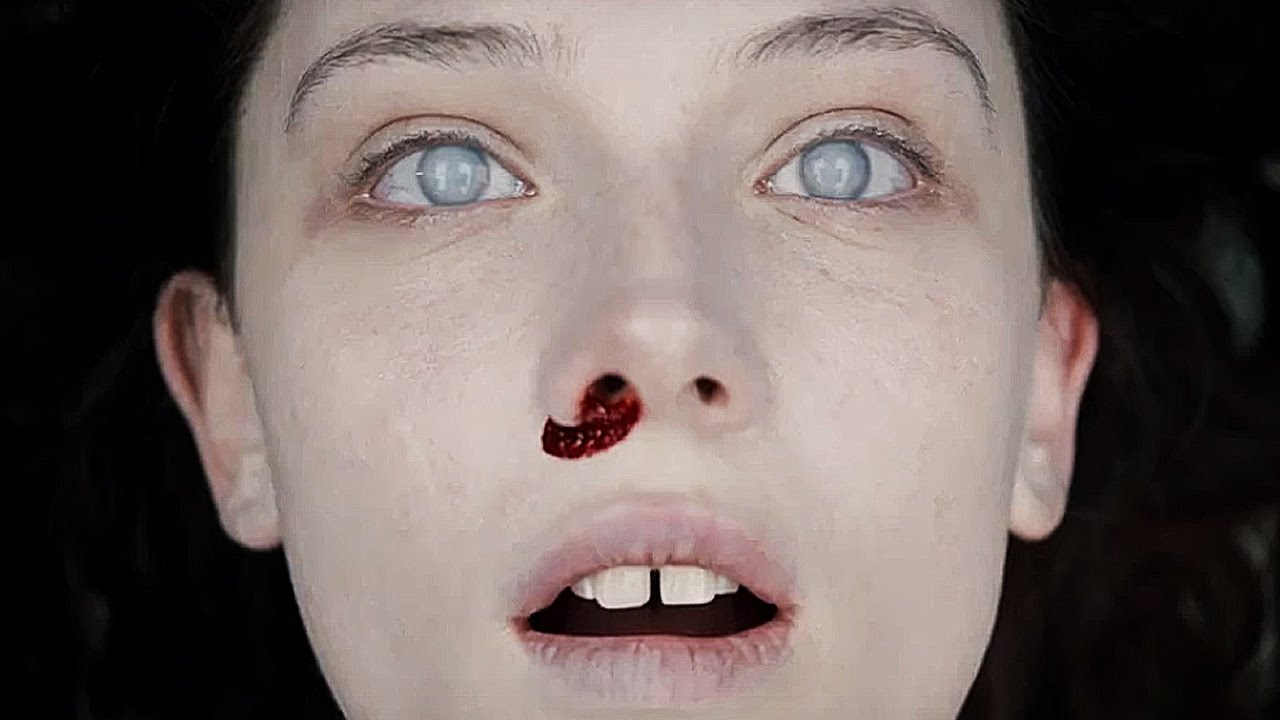 The Autopsy of Jane Doe is rather similar in its plot structure. A father and son, who run a funeral home as a small business, receive a body that is unidentified and had been retrieved from the crime scene of a multiple homicide. As the duo begins on the corpse’s autopsy, it is clear something’s not right. The female body is not breathing, but it doesn’t seem to be dead either; there are no outward causes of death, and the only traumas apparent to her form is broken wrists and ankles, and a missing tongue. As the father and son continue to dissect her, physical wounds reveal themselves on her internal organs – burned and scared lungs, a digested paralyzing plant, a swallowed molar wrapped in fabric. This fabric contains strange symbols, that also appear on the inside of the woman’s skin. But just as the father and son seem to be discovering what’s going on with this mysterious corpse, the cadaver lab breaks into chaos with the radio changing stations unprompted, the corpses disappearing from their respective freezers, and the two men being locked in the cadaver lab. In a panic, they try to burn Jane’s carcass, but it does not catch. A dissection of her brain reveals that her brain cells are still living, implying that she’s still alive. The father and son soon come to realize that the symbols on the inside of the body’s skin refer to a Bible verse that condemns witches, and they understand they have something powerfully occult on their hands.

Similar to Carrie, Jane Doe’s power seems directly sourced from her physical form. As the two men autopsy her, her biology reveals the extent of her abilities, just as Carrie receiving her period revealed hers. Jane Doe also utilizes the same outlet of supernatural power and violence to seek revenge on those who have wronged her. For Carrie, there is a much clearer target, as the audience sees her wrongdoers in action. For Jane, this is much more complex. Her body seems to wreak havoc wherever it is located- first claiming victims at the original crime scene, and then again at the autopsy lab, and presumably again at whatever future location she ends up after her final ambulance transport.

But just because Jane’s revenge seems to victimize a broader audience, does not mean its hugely different from the vendetta that Carrie inflicts. Just like Carrie, Jane was wronged by the society in which she lived- she was an innocent woman turned into a witch through the violence perpetrated against her. Carrie has also been wronged by the school environment she’s grown up in. Carrie’s worldview is simply much smaller than Jane’s; the extent to which Carrie’s society exists is the walls of her high school, while Jane’s corpse has experienced immense pain for centuries, as she’s remained trapped in her physical form. It’s no wonder this character’s violence has grown as generalized as it has- she’s been waiting hundreds of years to express it. Both Carrie and The Autopsy of Jane Doe provide interesting narratives on femininity and its ties to the occult, ultimately demonstrating the power of the female form and the bloodbath deserved by the systems that impose structural violence onto it.