Queer Christmas: Is This Really the “Happy” We Want? - mxdwn Movies

Queer Christmas: Is This Really the “Happy” We Want?

*Spoiler alert* this article contains spoilers to the plots of Carol and Happiest Season in order to analyze their structure. If you haven’t seen either of these films and are excited to, don’t read further.

Christmas is a holiday typically associated with cheer, joy, and merriness, especially in media. It seems, through the holiday’s rose-tinted portrayal, that pretty much nothing can go that wrong on Christmas; Santa will still come, family will still find the value in one another, and hearts will always be warmed. Films romanticize the season to great extents, using the holidays as a backdrop for family dramas and romantic narratives. For almost every straight couple that finds themselves within Christmas plots, there’s not really anything to worry about; they’re going to end up together in the end and, importantly, they’re going to end up happy.

This is not the case for queer couples in cinema, at least not until recently. And even the recent extensions of queer Christmas movies haven’t truly delivered meaningful, romantic endings. What is it that makes queer romances so much less satisfying than straight couplings in Hollywood? To answer this question, let’s take a look at renowned lesbian drama Carol and the new lesbian romance Happiest Season to understand just how the industry prevents queer couplings from producing truly happy endings and truly happy partnerships. 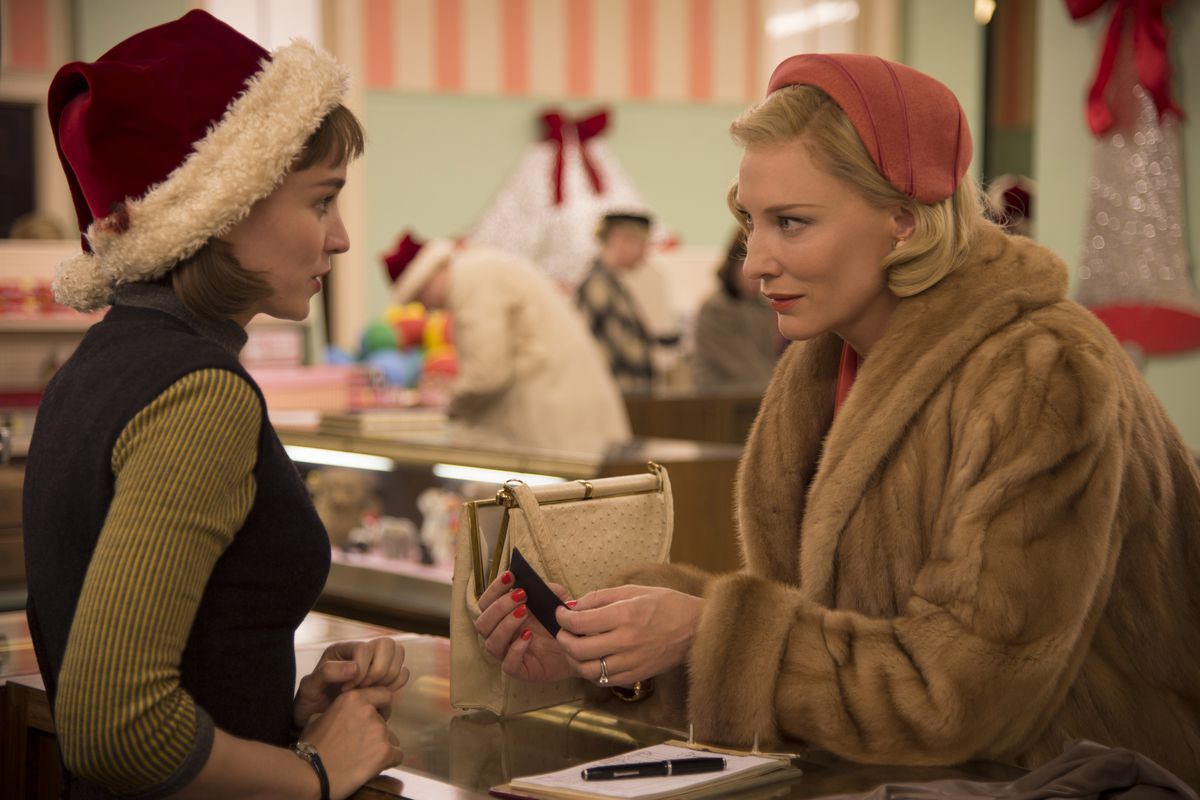 Carol is not inherently a Christmas movie; sure, some of the plot takes place during the Christmas season, but that’s not necessarily an important aspect of the film’s narrative. However, when one Googles “lesbian Christmas movie” this somber drama pops up on every list. Due to a lack of supply of queer Christmas films, this one will get lumped in with the few and far between small budget films that portray gay Christmas tales. Regardless of technical genre, Carol is still an important queer representation to look at and analyze in terms of the romantic narrative it delivers to expectant viewers. Carol tells the story of a wealthy housewife who falls in love with a young, female artist in the 1950s. The two run away together as Carol, the housewife, attempts to escape her husband’s will and as the artist Theres falls deeper and deeper in love with the older woman. Carol decides, however, to ditch their life on the road and head home in an attempt to salvage her relationship with her young daughter, leaving Theres to be chaperoned back to New York City. Carol changes her mind once again, later on in the plot, deciding her husband ought to have custody and that she must live the life that is truly hers, as a gay woman. She asks Theres to have dinner, inviting the possibility of the two being together seriously. Theres ultimately agrees to give the relationship a chance.

Carol’s happy ending is the one viewers are vouching for all along; Carol and Theres being together, despite all the odds that are in place to keep them apart. Yet the film itself is so undeniably melancholy, that the happy ending is effectively cancelled out by the rest of the extremely somber narrative. And this happy ending comes with contingencies too. Carol might be able to pursue Theres and build a life with her, but in the process she had to give up the custody of her daughter to do so. Theres had to deal with the agony of being left behind, as an afterthought to Carol’s husband and child, something that would no doubt build resentment between the two. Theres was victim to Carol’s indecisiveness between her true identity and her family, which to be fair is a very challenging decision to make, but it was, no doubt, hurtful to be collateral of that process regardless.

Happiest Season is the newest lesbian Christmas tale that stick to more traditional genre conventions; there’s family drama, romantic strife, and plenty of present shopping thrown into the plot. Despite its title, this film delivers only a sliver of happiness to its viewers after they endure a long plot filled with a myriad of hardships. Main characters Abby and Harper are a couple who live together and plan to go back to Harper’s family’s home for the Christmas season. Harper reveals on the way home that she lied about being out of the closet to her parents and that her family is expecting her to show up with her housemate, rather than lover. This plot premise seems to promise queer pain in some fashion. Once home, Harper begins to act much more similarly to her old, straight-presenting self, obsessed with her dad’s approval and even talking to her ex-boyfriend from high school. During Harper’s time reliving her life as a straight woman, Abby is cast to the side, befriending Harper’s ex-girlfriend Riley who seems to understand her pain. At the final family Christmas event, when all tensions come to a head, Harper’s sister reveals she is actually in a romantic relationship with Abby, a bad look for her father’s political campaign. Harper adamantly denies this, calling her sister crazy, as Abby plans to leave the gathering and break up with Harper all together. In a change of heart, Harper decides to tell her family the truth about her relationship and in the end the two enjoy a pleasant Christmas Day with Harper’s family.

This “happy” ending, just like Carol’s, is marred by the unsurmountable amount of turmoil that occurs in the plot of the film. Abby endured so much hardship to try to help Harper keep her secret identity from her family, only to be initially rejected as Harper’s romantic partner as she denies it to her family. Many viewers online thought that the film would have ended better had Abby simply broken up with Harper and left her family’s home. Others rooted for the blossoming of a relationship between Abby and Riley, who shared on screen chemistry. Either way, audiences did not think that Abby deserved to end up with Harper after all the things she put her partner through. Even looking at Harper’s position with some empathy, her time at home was almost equally marked with pain. She had to shed her true identity as a gay woman and perform as straight, something that surely took lots of her energy and felt dreadful. Both of these main characters had terrible times throughout Happiest Season’s narrative, only finding reprieve from their challenges at the very end of the film. 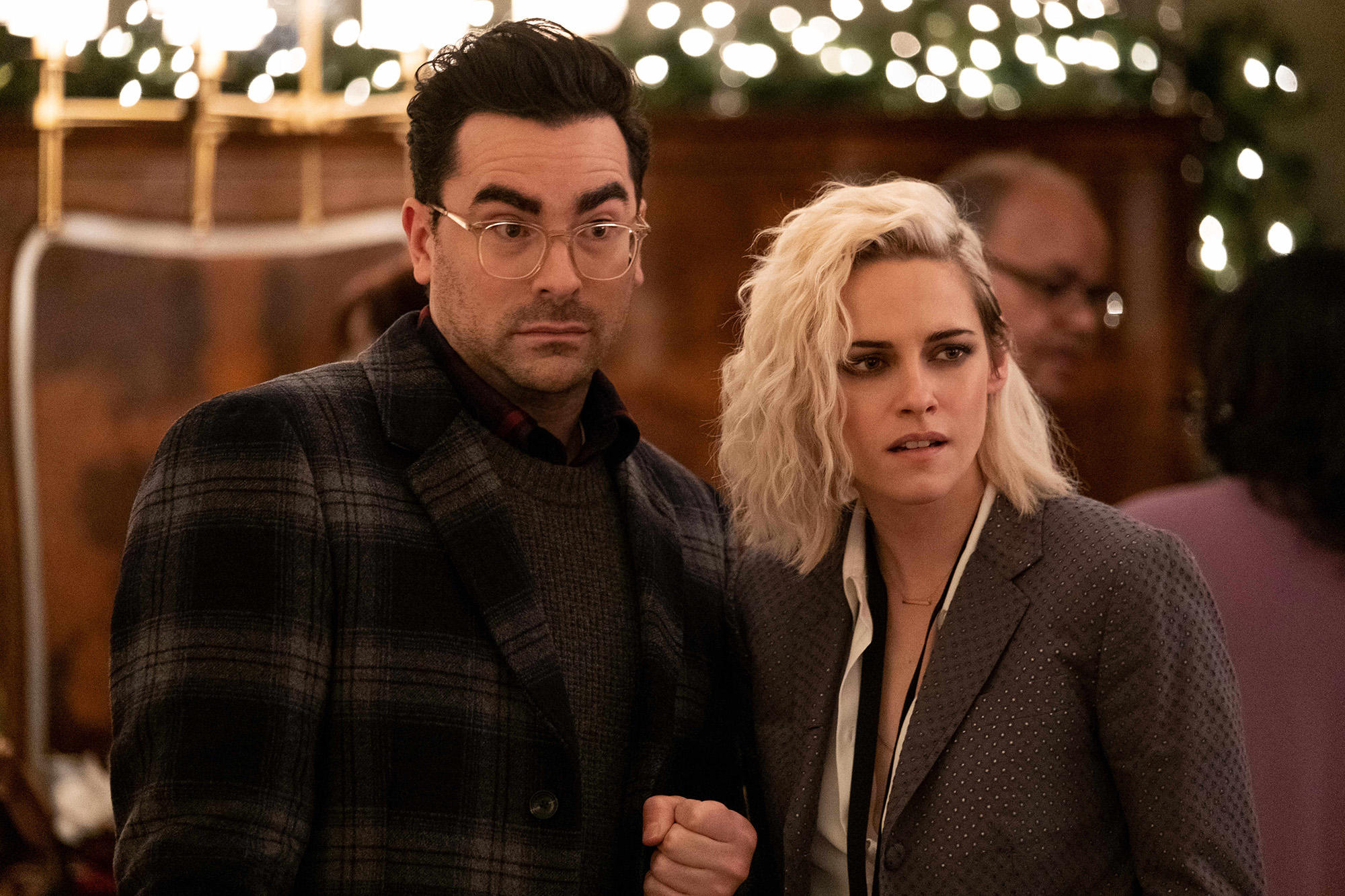 This is exactly what connects Carol and Happiest Season; they’re plots are reliant upon queer suffering. Unlike straight couples, for which everything happens to work out beautifully, gay couples in Hollywood cinema are almost always distinguished by the amount of suffering they must endure to “be who they are”. Rarely are queer characters portrayed from a happy-go-lucky perspective; they almost constantly have to sacrifice their happiness or parts of themselves in order to be in romantic relationships. This is the flaw with which Carol and Happiest Season were created upon, preventing both films from having truly happy endings despite their attempts to. Carol and Theres’s relationship is characterized by the sacrifice Carol had to make in order to be with Theres, just as Harper and Abby’s relationship is characterized by how much Alex had to suffer for her partner. These queer love stories taking place in the context of the Christmas film genre only emphasizes the difference between straight romance and queer ones; straight couples embody all of the magic of the Christmas season, while queer couples seem to embody the melancholy that the season also brings with it.

So do both Carol and Happiest Season technically have happy endings? Yes. But are they fulfilling ones? No. It’s impossible to feel truly satisfied by the ending of either of these movies, as so much suffering takes place to lead up to them. A truly queered queer film would portray characters and romantic partners in a way that did not fully rely upon their pain and sacrifice as gay community members. A queered queer film would focus on the cheer, the joy, and the merriness that queer relationships can contain. When the film industry succeeds in portraying this type of queer relationship is when representation for the LGBTQ+ community will actually feel complete and accurate. Until then, Hollywood, keep trying.