‘Attack the Block’: Sci-fi’s Take on Race, Gender, and Class

Attack the Block, a 2011 British film depicting the real time possibility of an alien invasion, discusses some topics that are much larger than one might expect a sci-fi film to hit on. The film, despite its generic conventions, tells the story of an alien invasion through a perspective that undoubtedly addresses class and race in a way that makes a meaningful statement over all.

Attack the Block starts off with a precarious situation; a white woman is walking home alone at night and is suddenly surrounded by a group of young men, who demand her belongings from her. Moses, the leader of the group of men, confronts the woman, toting a pocket knife in the process of robbing her. The woman is able to escape as a meteor crashes into a nearby car and the gang of men becomes perplexed with the fallen object. Quickly, after trying to scrap any valuables from the busted car, Moses realizes that the meteor wasn’t just some rock falling from the sky; it was some bizarre, living thing with claws. Moses quickly realizes how violent the creature is as it scratches his face and runs away. Not wanting to give up without a fight, Moses and the crew follow the creature, beating and killing it and toting it around as a trophy after their kill. They bring the creature to the local weed dealer’s apartment, inquiring a friend about the specifics on the creature’s species.

Before the group knows it, however, more things are falling from the sky. The group decides its their job to protect the neighborhood, venturing out to the nearest meteor site to meet whatever creature may lie there. They realize that the things falling from the sky now are much bigger and more intimidating than the initial creature was and retreat back to the block. Upon returning they run into the police who are with the white woman who was initially mugged and who arrest Moses. After being taken into custody in the police van, the vehicle is suddenly attacked by one of the space creatures, killing both police officers. Moses and Sam escape the vehicle. On their way back to the block, the group is chased down by various creatures, barely making it back. The group finds Sam, the white woman they mugged, in her apartment and asks her for help as Pest’s leg has been injured by the aliens. She joins their group and the team continues on into the block, heading towards a local teenage girl’s apartment next. After making it back to the weed dealer’s “weed room” they begin to understand why the creatures are hunting the group down specifically and make a final plan for how to rid them from the Earth. After pairing up with Sam, Moses is able to bring the aliens down, with the whole film ending in his ultimate arrest and placement into police custody. 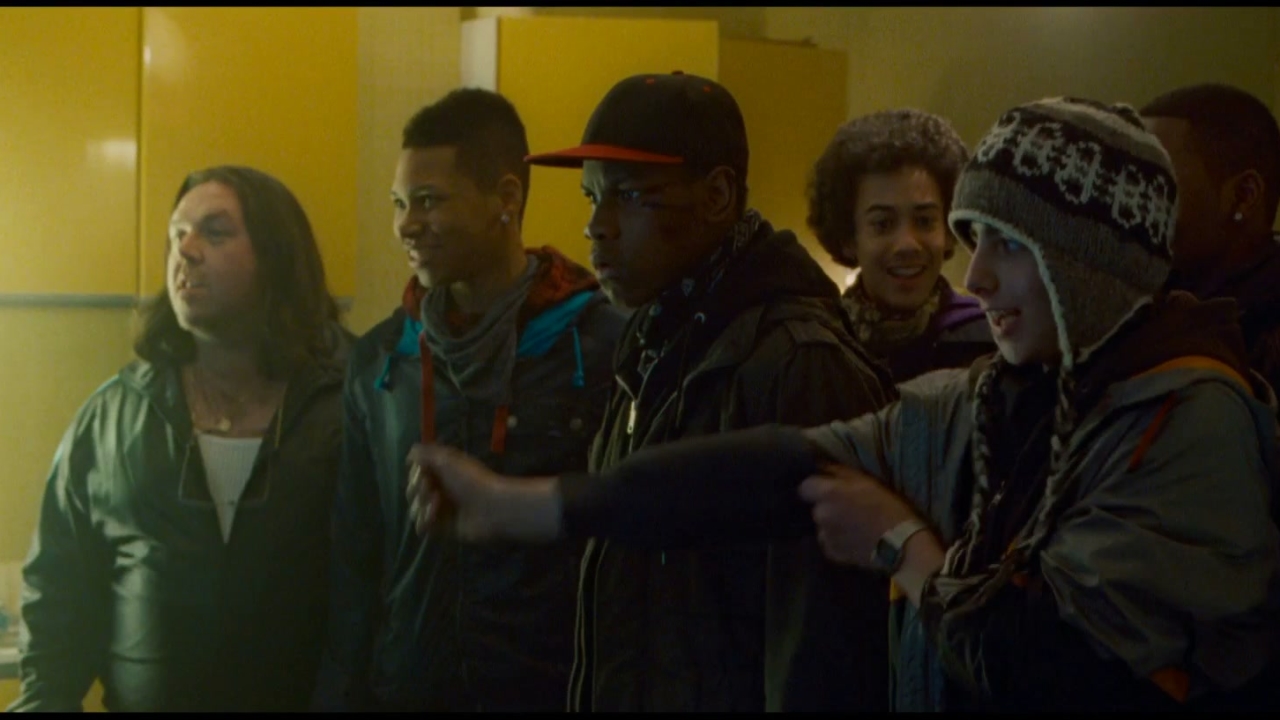 From the outset it is clear that the story being told in Attack the Block is inherently raced. Moses, a Black man, is distinctly villainized within the first plot point of the film. Being the lead mugger, depicted with a knife, he is quite literally made into the violent villain, taking out his aggression on the most stereotypically victimized demographic within the media and historically. The use of the white woman as the victim is meant to highlight the Otherness of Moses and how this otherness distinctly sets him apart and demonizes him in comparison to the victim. This establishment of Moses as the villain plays into stereotypes about the violence and aggression in Black men, which the entirety of the narrative is complacent in within the first portion of the plot.

Within the plot itself, the alien creatures very much stand in as an “other”, making them inherently racialized in the context of the narrative. The creatures, aside from the first one which is determined as a different kind from the threatening and enemies of the gang from the block, are determined to be “blacker than black”, something that sets them up to be racialized just as the main characters are. The darkness that represents the creatures and that the creatures represent plays into an age old dichotomy that defines darkness and blackness as naturally evil or bad. This dichotomy is dangerous in its essentialness because it prescribes characteristics of negative effects to those individuals associated with darkness. Thus, the blackness of the creatures work to perpetuate negative stereotypes about the badness or impurity of Black individuals and otherwise “othered” groups of people within society.

Finally, it is the plot line having to do with the police that truly seals the deal on the way in which Attack the Block is an undeniable racial and class commentary in combination with being a sci-fi thriller. It is the very setting of the block- a neighborhood of low-income housing- which intrinsically classes the plot of the film, making all the lead characters out to be lower class individuals operating in a low class setting. The use of police force in this setting then begins to make more sense; we see the police jump to action once Sam reports Moses’ crime, eager to catch the low class, Black criminal. Then in the final part of the plot, when Moses is arrested after saving the block, do we fully understand the extent to which police violence will affect Moses’ life regardless of the ethics of his actions. He will be thought of as a low class, Black criminal in the eyes of the police simply for existing regardless of what his actions may do to counter that narrative. This is ultimately exemplified by his arrest.

Attack the Block takes a sci-fi narrative and makes an interesting social commentary out of it, commenting on race, class, and gender in the process. By playing on the classic dichotomy of light versus dark, the narrative takes on a pretty structurally racialized approach to the sci-fi genre, as seen in many films before, though perhaps not as explicitly stated. Then the film’s commentary on the villainization of Black men and the corruption of the police also work to build the movie’s explicit racial and class-based commentary. What we can learn from Attack the Block is, hopefully, that good genre films don’t always just have to stick to conventional notions of entertainment and can, rather, act as important sites for social criticism as well.