9 to 5 has established itself as a classic in feminist media. From its lead star Dolly Parton, to the film’s cute and fun aesthetics, it’s no surprise that this film has been heralded as one of the greats since its release in 1980. However, the feminist politics of the film are a bit more nuanced than it might seem from the get-go. Let’s take a look at the way “girl boss” feminism works in 9 to 5 and analyze the implications this stunted version of “feminism” has on the lead characters in the film and its societal impact.

After splitting with her husband, Judy needs to work in order to make it by. She gets a job at Consolidated Companies as a secretary working under the infamous Mr. Hart. Violet, Judy’s new supervisor, shows her around the office and helps her get settled in. Judy meets Mr. Hart’s assistant Doralee, who is pretty much disliked around the office as rumors spreading about her having an affair with Hart have made her coworkers heated. After one specifically trying afternoon at the whim of their sexist and overall chauvinistic boss, the three women band together at a local bar, having been completely fed up with their superior’s antics. Soon thereafter, Hart is rushed to the hospital after hitting his head on his desk. But Violet believes his hospital visit is due to her accidental spiking of his coffee with rat poison, so the three women chase him down, trying to cover their tracks for Violet’s manslaughter. After realizing that Hart was not dead, a coworker over hears the trio discussing the potential harm done to Hart and rats them out. After being pushed to their breaking point, the three women kidnap Hart and keep him tied up in his home for weeks, adjusting things around the office in his absence and running things how they want to. 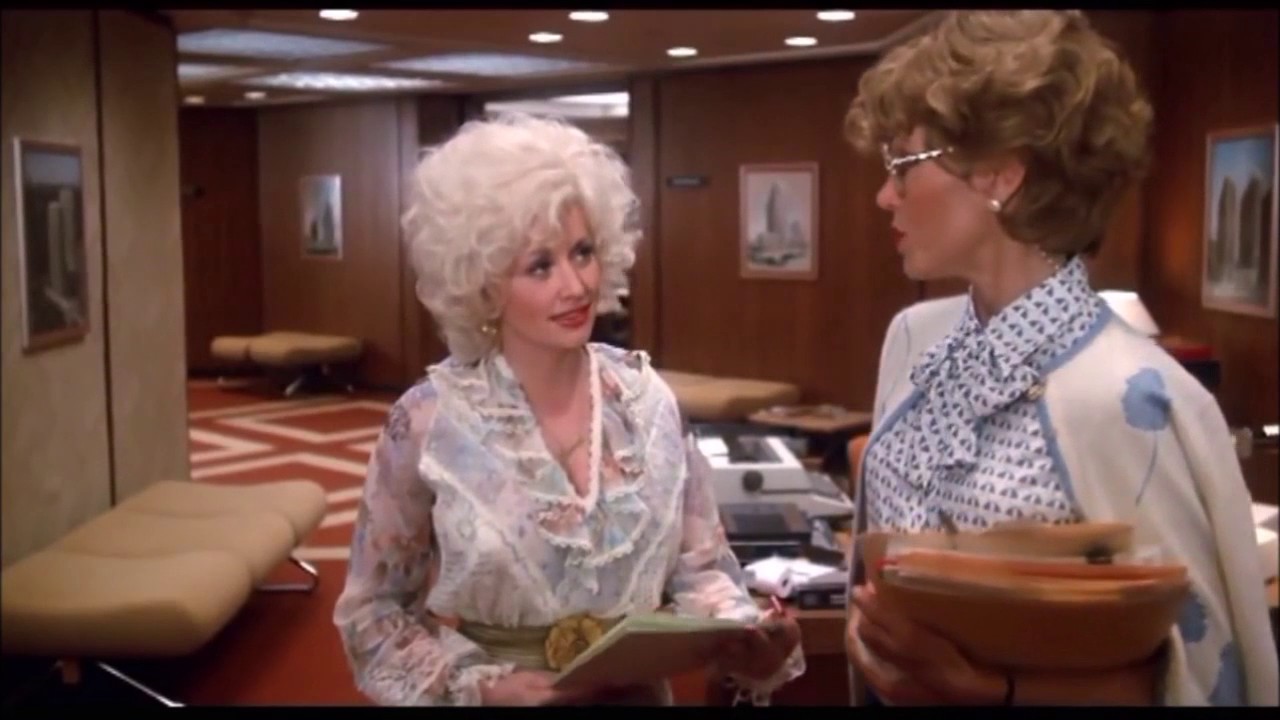 The representation of sexist oppression in 9 to 5 is comprehensive because it addresses the various ways in which sexism can manifest in everyday life. Doralee, Violet, and Judy are all discriminated against, by Mr. Hart, in separate, unique ways. Doralee is oppressed by her incessant objectification, both at the hands of her male boss, but also at the hands of her female coworkers- she faces sexism from both men and women. Her resignation as a sex object makes her perceived humanity non-existent; her coworkers and Mr. Hart don’t see her as a human being, just as a thing to be fetishized.  This reduction of the self prevents Doralee from being able to pursue her dreams which is building a community out of the women she knows.

Violet and Judy’s sexist oppression happen in very different ways from Doralee. Judy, having just started her job and with not a ton of experience under her belt, has perhaps the least amount of sexist treatment from Hart, but still enough to push her over the edge in rebellion. Hart treats Judy like a child, yelling at her in the copy room scene as one would a disobedient dog. The sexism that oppresses Judy infantilizes her, as Hart acts like she is too incompetent to be worthy. Violet faces a similar type of oppression. She has been short-ended for years at Consolidated Companies, being passed up for higher positions by men less qualified than her time and time again. In this way Violet is also infantilized; she is sold short, unrecognized for her immense contribution to the company, and told that she’s just not good enough to be promoted. As described, sexism and its various extents can be seen throughout the film, making it inclusive of various types of oppression that stem from sexism.

Despite its inclusivity of the variety of problems that may affect women, the film itself really fails in all other forms of inclusivity. To put it frankly, this film was made to represent the narrative of straight, white, middle class women and no one else. It wasn’t made for queer women, women of color, or poor women. There is barely any representation for women of color in the entirety of the film, except for a few scarce shots of the handful of non-white secretaries that worked in the office. Leaving out the perspective of women of color, poor, and queer women helps to build up the very superficial feminism that exists in 9 to 5. Only representing the plight of such a specific kind of women almost completely discounts the very real struggles of other women and disregards the fact that these other women have it harder than Doralee or Violet or Judy. Additionally, the politics of “girl boss” feminism is what makes this film add up to a pretty ambivalent feminist text, rather than an admirable or revolutionary one. Girl boss feminism does not ask for more than it is given, and therefore can never really be revolutionary, as it doesn’t challenge any of the systems or conventions that are already in place. This is somewhat challenged, but then exemplified in 9 to 5. While Mr. Hart is kept captive, Violet, Judy, and Doralee implement many changes in the workplace that allow for more happiness and a better sense of community. The CEO of the company comes in an allows for them to keep all the changes they’ve implemented in place, except for equal pay. To this the women simply shrug and say that they’ve made so many positive changes so far, they have to take what they can get.

So over all, yes, the film is technically a feminist work- there’s no denying what it represents for many women, especially having come out in the 1980s. But is this feminism really something to write home about? No, not really. It completely excludes women of color, among other disenfranchised women. It also fails to be in any way promoting radical change or revolutionary thought, and instead very much sticks to the status quo.