Senior Year is the latest teen flick from Netflix. Stephanie Conway (Angourie Rice) is an Australian immigrant living in America. With her accent and quirky personality, she struggles to assimilate into the popular crowd at her high school. After no one shows up to her birthday party, she makes it her mission to become the most popular girl in school. She becomes a cheerleader, gets the popular jock boyfriend, and runs for prom queen. She idolizes local legend Deanna Russo (Alicia Silverstone), former prom queen who has a seemingly perfect life with her handsome husband and elegant home. Everything is as perfect as can be for “Steph,” as she’s referred to by her friends. That is, until she is sabotaged by the school’s mean girl, Tiffany, who persuedes a couple of her fellow cheerleaders to mess up Steph’s big stunt at the pep rally. She lands herself in a serious twenty year coma.

When she wakes up, she’s a thirty-seven year old woman (Rebel Wilson) and all those high school dreams are behind her. Steph is overwhelmed by the new normal, as there has been a huge cultural shift since 2002: new lingo, social media, and the fight for inclusion. Steph returns to high school fully intending to pick up where she left off. However, she faces difficulty when her former best friend and outcast, Martha (Mary Holland), is the principal. Steph is horrified by Martha’s initiatives to create an inclusive environment at the school, including getting rid of prom king and queen, and reimagining the cheer squad. In this 2022 high school, everyone’s a winner. Steph stops at nothing to implement her old ways as she is welcomed by most of the students who quickly befriend her. Steph gets to have her high school experience she had longed for all along, only with some much needed changes in how she views herself and the world.

Rebel Wilson stars as Steph, and as always, she brings her lovable personality to the character with her unapologetic humor. The film features a lot of talented young actors like Avantika Vandanapu and Joshua Colley who play Steph’s friends when she returns to high school. Additionally, Steve Aoki makes a brief cameo as he is hired to DJ at an after prom party. 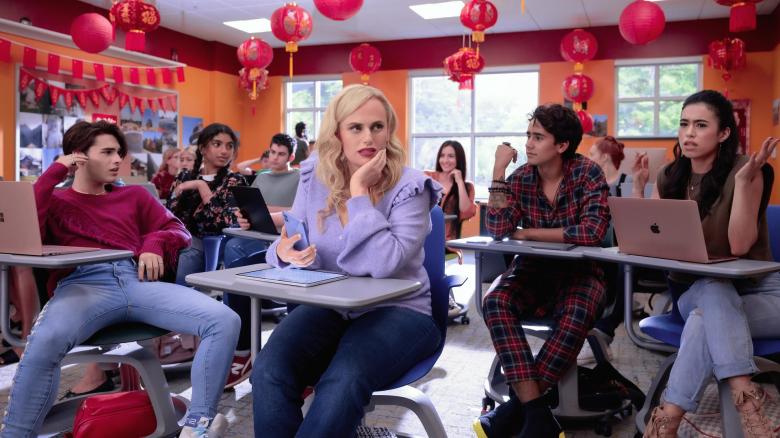 The movie has a similar look to some of the other teen films from Netflix such as To All The Boys. Both films feature high contrast and vivid colors. The costume design is also refreshing, as the high school students are dressed in relevant, appropriate attire. The wardrobe for each character is unique and suits their personalities well.

The movie presents a question that many have considered at one point or another: What if I was in high school today? Some may be frightened to consider such things, some may long for the opportunity at a do-over. Whatever the case, it’s an intriguing concept for a film. While the movie explores these what-ifs in a creative way, it does feel empty at times. It lacks in heart, which is unfortunate, but could be due to the ambitious attempt to cover so many storylines. There were also moments where it was evident that the filmmakers were trying very hard to tap into pop culture to stay relevant. There are certain lines in the script that sound a bit too forced for the purpose of emphasizing that the year is 2022. It does the same in the 2002 storyline when Tiffany and Steph have a cringe exchange involving TLC lyrics. There are also a few storylines introduced that never get resolved. One involves Steph and her high school boyfriend, who has inevitably married Tiffany. However, his storyline is ditched in the middle of the second act, which is quite a let down.

All things considered, Senior Year does have some redeeming qualities. Steph shares a candid, heartfelt conversation about the reason behind her obsession to be liked. In this scene, she opens up about her mom’s death and how miserable it made her. She also shares a conversation with her Lyft driver, who lets her know that not everything is what it seems and to embrace the important things in life, which don’t include good looks and clout.

In spite of its flaws, movies like this are important — especially in the growing domination of franchises and reboots, when original stories are struggling to sustain the attention of filmgoers. It’s refreshing to see a film that tries to have a good time, and this movie definitely provides just that. There is even a grand dance number at the film’s conclusion, where somehow all the characters know the choreography to a T.

While the film is definitely entertaining and supplies the laughs, there is still lots to be desired by the end. Nevertheless, it checks off the boxes of a typical high school dramedy.