Review: ‘Venom: Let There Be Carnage’ is a CGI Extravaganza that’s Too Much and Too Little

Superhero films were once a not-so-common appearance. They were released every now and then and when it was those simpler times, audiences were generally thrilled at the sight of a high adventure coming soon to theaters.

Now, the superhero genre has exploded leaving us bombarded with numerous entries that are made at such a high frequency, it’s rather difficult to keep up. I was one of those critics that rather enjoyed Venom when it released several years ago and while it wasn’t a great movie, it was still a big improvement over the third Spider-Man movie. Now, we have part two and the big villain that fans have been waiting for is finally making his screen debut and that is Carnage. So with all the hype and excitement surrounding this film how does it fair?

Well, in short, it’s too much and too little.

Eddie Brock (Tom Hardy) still has Venom inside of him and now Eddie has merely accepted this problematic symbiote into his life. Venom generally causes havoc and chaos in Eddie’s life and together they are reminiscent of The Odd Couple. After the debacle that occurred in the previous film, Eddie has remained distant from public view. At the end of the first film, we were introduced to a serial killer that Eddie meets named Cletus Kasady (Woody Harrelson). Turns out he has a story that he wants to tell the world and the detective on the case named Patrick Mulligan (Stephen Graham) is looking to use Eddie in order to locate the victims of Kasady that have yet to be discovered. The story becomes huge news and Eddie is back in the main spotlight. Job well done.

The movie decides to revisit the past to explore Cletus and the love that was taken away from him. Cletus was a resident at the Ravencroft Institute where the bad kids were sent. There he made a friend named Frances Barrison (Naomie Harris) who became someone special to him. After they were separated when Frances is being moved to another facility, we see her ability which allows her to scream at such high decibels that it can cause irreparable damage to one’s ear. One in particular is detective Mulligan who was just a young police officer in the flashback.

Back to the present, Eddie locates the missing bodies of Kasady and now a death sentence has been ordered on his life. The serial killer’s days are numbered and he wishes that Eddie were there to see him on his final day. During a confrontation, Venom fears that Kasady is a threat to Eddie and launches an attack whereby Cletus bites the hand of Eddie which causes it to bleed. The blood that is running through Eddie’s veins has now entered the body of this serial killer. You might have guessed it by now that Cletus is going to have a transformation that will forever impact his life and sure enough the symbiote spawn known as “Carnage” arrives and is a sure to be a badass. 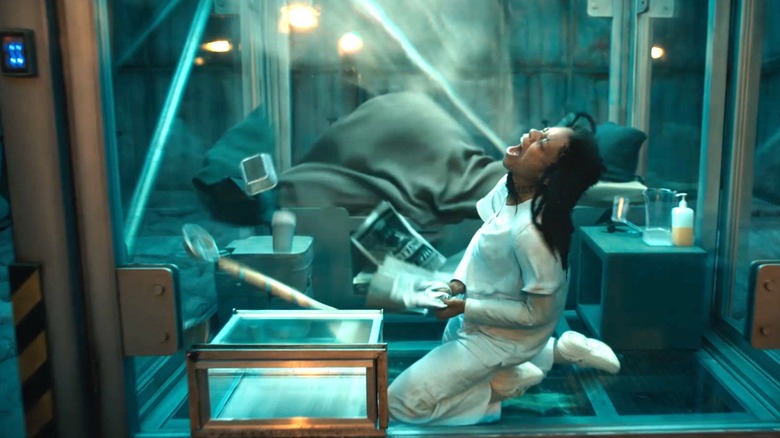 Next, the film follows the typical superhero formula of the hero wanting to do the right thing and set everything straight and the ending envelops into a battle that will leave only one standing. Blah blah blah.

Even though I did enjoy the first Venom to a fault, this sequel feels as if someone dumped a thousand-piece puzzle in front of you and told to that you have thirty minutes to put it all together and after that time, we’ll call it a job well done. Venom: Let There Be Carnage is a perfect title for this film for the simple reason that that’s all it is. Nothing but destruction, violence and an overload of CGI that fills the screen to the point of being headache inducing.

The disappointing thing about this movie is how it tries too hard to entertain the audience with comedy and action while giving us just the bare basics of a plot in order to keep us interested. I wanted to know more about Kasady and his love named Frances but the movie moves over their relationship so fast that it was impossible for me to care about them. Carnage is reduced to a red-looking danger killing machine without any personality that assisted in the audience getting to know the character of Venom and the fights are so cartoonish that I couldn’t take any of it seriously. This is a juvenile film that barely passes in terms of a Marvel movie and that is a step-down in quality.

While the first film was flimsy at best, this sequel is an overload of eye-candy on the screen without any bite to justify my need to become involved in any of it.

Woody Harrelson and Naomie Harris are wasted as their characters are reduced to just being villains for our hero to fight. I did enjoy seeing Tom Hardy again and his interactions with Venom are fun to watch but at the end of the day, Venom: Let There Be Carnage is another sad excuse for a superhero film that didn’t take the time to care about story, suspense or anything of value for us to remember.

It’s all noise, colors and loud bangs on the screen and one should expect higher quality within the Marvel Canon. After all these years of waiting for the ultimate villain that is Carnage, his appearance was better left to the imagination of the comics we read than one minute of seeing him in this movie. What a shame.