Buying a home is part of the American Dream. Becoming homeowners for the first time is exciting, not just for the reason of having your own place, but also for having family and friends over, raising your own family, and having a place of your own to relax after a long day. The Intruder is a new thriller that follows a married couple who seem to be suffering from “buyer’s remorse” after they purchase their home from a man who develops something I call “seller’s regret”. It’s a well-intentioned thriller that doesn’t add up to much with the exception of a bundle of laughs from the audience.

A married couple named Scott (Michael Ealy) and Annie (Meagan Good) purchase a nice home in the suburban town of Napa from a lonely widower named Charlie (Dennis Quaid). The young couple wants to get away from city life, unwind, and think about starting a family together. Things are looking up for the couple, that is until Charlie continues to arrive on the property unannounced and uninvited. We don’t know why he does this but we can assume his intentions are not the best.

Charlie can’t let go of the house and pays visits, almost daily, to the new homeowners. He acts oddly, is very protective of his once home, and is eager to spend time with Annie. Both Ealy and Good provide exceptional performances from the script they’re given, while Quaid is a different story altogether. He does embody that creepy look but at times its overplayed, perhaps for laughs. I liked watching Quaid in this role but he’s an actor that can do better. All the same, what he does is unique to watch. It’s not great but it’s not terrible.

The Intruder is one of those clichéd thrillers where the audience knows what is going to happen next and there aren’t many thrilling moments. Just over 100 minutes, the movie is a slow burning one. There aren’t any surprising moments although there’s one scene with a twist that enticed me. Director Deon Taylor’s filmography hasn’t been impressive but that isn’t to say this is a bad movie. In fact, some of the film shots are very good, especially when viewing San Francisco, Napa Valley, and the house itself. The script is the weak link here. 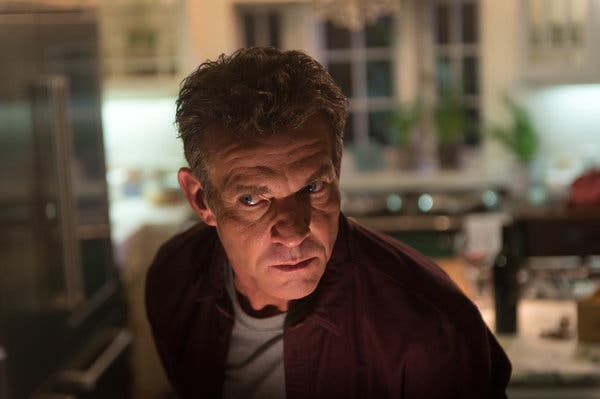 The Intruder lacks thrills or scares. As the story moves along, it becomes ludicrous, ridiculous, and funny when it’s not meant to be. I actually recommend this for a date night movie simply because of the conversation that will follow thereafter, just don’t expect much going in. I questioned why the final product lacked suspense, something that would’ve made the movie at least interesting. With a bundle of laughs and a creepy look from Quaid, The Intruder may not be good in any respectable way, but it definitely can be seen as a guilty pleasure. I walked out of the theater laughing and you may too.