Movie Review: ‘Spiral: From the Book of Saw’ or simply ‘Spiral’

The game continues even though John Kramer is dead. I assure you that the Jigsaw Killer is dead. If you recall, we saw his autopsy performed during the beginning of Saw IV. John Kramer left behind a legacy that shook the very city from which story unfolds to its very core and everyone remembers him. Years have passed since the serial killer’s death and now it appears that a new game has started only this time around, a group of people aren’t kidnapped and locked inside a building, no no. Cops are being targeted by a mysterious killer who uses Jigsaw’s M.O. when committing his crimes.

The movie opens with a trap! A cop is finds himself inside a subway tunnel and is dangling from a contraption on the tracks. A box television appears where a different looking pighead informs the officer of the ordeal he’s faced with. He has only two minutes to save himself otherwise the train approaching his position will kill him. The trap itself is a great way to open the film and sets the tone. Instead of people finding traps, we are taken on ride of a detective story involving Detective Zeke (Chris Rock). Zeke is the black sheep of the department, literally speaking. He wastes no time in exposing corruption, or cops breaking the rules or sometimes the law. Others cops on the force know who he is and refuse to work with him.

Zeke is a loose cannon so to speak. He will do anything he can to seek justice but displays a poor outlook on life. He’s going through a divorce and with the hostile work environment, Zeke is just counting his blessings at this point. A package arrives for Zeke at his precinct which reveals that the Jigsaw games are back in action. The victims this time around aren’t drug dealing, junkies or people who make life a living hell for others. No, turns out that the game is reserved for cops. Against the protests of Zeke, his Captain Angie Garza (Marisol Nichols) assigns him a new partner named William Schenk (Man Minghella).

Together, these two detectives venture from scene to scene examining gruesome images of dead police officers who have fallen victim to this “Jigsaw copycat”. Some of the traps that are presented in the film are quite unique and the punishment inflicted on said victims are appropriate for their sins. I won’t reveal much concerning the plot but I will give away some crucial information that benefits the audience. This movie is just over ninety minutes and just drags on and one with only the last twenty minutes being the most exciting and honestly the best part of the movie. Director Darren Lynn Bousman (who previously directed Saw II, III, and IV) returns to helm this project and while he does good work in displaying the traps, the script itself is rather conventional albeit breaks away from the grittiness of the previous installments.

Spiral suffers from an identity crisis. There are moments of comedy which is kind of nice. The element of the buddy cop genre is ever present but the scares aren’t really there. Sure, the Saw franchise isn’t known for delivering heart-wrenching scares but even this movie felt very predictable. Once we find out who the killer is, it isn’t much of a surprise although I did like his motivations for setting up his gruesome traps. That’s perhaps the best element of the movie is the motivation of the killer which I won’t reveal in full detail but I think the film could’ve benefited more if it remained laser focused on that plot point instead of adding in additional drama that’s makes the movie rather boring. Plus, the voice for this new pighead is just plain goofy and something that I can’t take seriously. It sounds similar to Kermit the Frog and last I checked, that character didn’t instill fear into anyone.  It is an improvement over Jigsaw, which is a good thing at least. 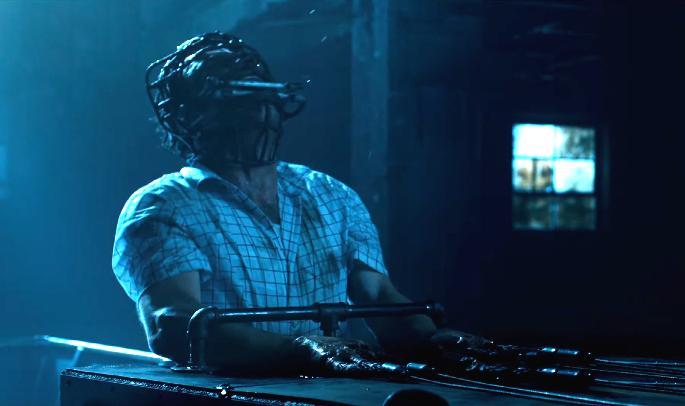 I was rather impressed with the end result of Spiral but building up to that point was nothing short of lackluster. I saw several people exiting the theater to use the restroom or refill their drink and that is never a good sign because it shows that the audience is becoming less involved in the plot. Like Jigsaw, this movie takes place during the daytime which I find so irritating. Saw was known for its dark, decrepit environments and seeing the sun sort of undercuts the suspense in regards to the fear of the unknown. The performances are fine but the script was more focused on too much drama for any of use to care. This is a Saw movie. We want cool traps and gore.

It does deliver on the latter but Spiral could’ve been a better movie if the script was more focused on the horror elements that made Saw the franchise it became. Perhaps if there’s another entry, that film can go back to the roots that true fans are eager to revisit when they watch the original seven films again and again.