By now, you know what kind of movie McFarland, USA is, and you probably know whether you’re up to watch another one. Remember the Titans. The Rookie. Miracle. Invincible. Heck, Million Dollar Arm was just last year. Disney’s been making inspirational sports movies for a while now, and though the sport and the cast may change, there’s a formula here that remains intact. That’s not necessarily a bad thing, because the formula still works pretty well. McFarland, USA isn’t going to change any minds, but it’s an enjoyable crowd pleaser of a movie that probably does a better job dealing with race than the other Kevin Costner movie that’s come out this year, the rather obnoxiously titled Black or White. 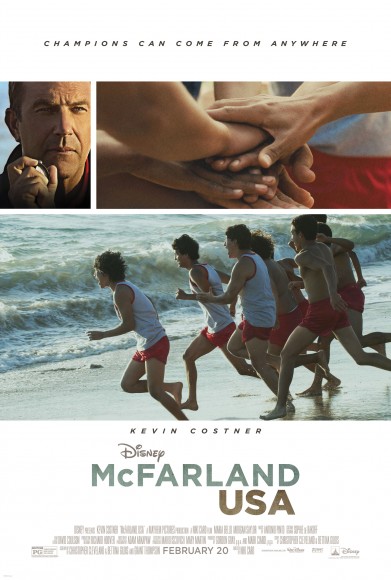 Our underdog heroes in this edition of the Disney Sports Film come in two flavors. Our main protagonist is football coach Jim White (Costner), who is forced to take the only job he can get, a lowly assistant position in the poor crop picking town of McFarland, California, after he accidentally hits a player with a thrown cleat. His he and his family stick out in the almost exclusively Hispanic town, and Jim initially just hopes to lay low and stick it out for a couple years until he can find a better job elsewhere. Secondarily, we have the cross country running team he cobbles together from local crop picking boys after being effectively banished from the football coaching staff.

Admittedly, that creates a movie that is a little at odds with itself; the whitewashed Hollywood machine means that the spotlight is almost exclusively on Costner, rather than shared between players and coach a-la-Remember the Titans. Although some of the movie is devoted to a couple of the runners in particular, there’s nothing much more nuanced than, “We’re the children of pickers, we expect nothing more for our own lives, and nothing more is expected of us.” Rather, the movie tries, with varying success, to play Jim White and his family against Hispanic culture at large and the town in which they now find themselves ill-fitting residents. I enjoyed that part of McFarland, USA insofar as it was a sort of melting pot in reverse, where the Whites are assimilated into the culture of McFarland and enriched for it, but it also seems tragic to me that the movie always approaches its plot from the perspective of the white man (who even goes out a day picking with some of his runners to better understand their lives) rather than immersing the viewer in the less familiar world of one or more of the students. Still, there’s undoubtedly a celebration of Hispanic culture on display as well, not to mention grateful (if not quite righteously indignant towards their working conditions) attitude towards the men and women who are instrumental in harvesting American food. White and his family are graciously adopted by the new neighbors they initially understand so little of, culminating in a wonderfully fun scene where many of White’s new friends help him surprise his eldest daughter with a quinceañera.

As for the sporting events themselves, a cross country meet isn’t exciting in quite the same way a football or baseball game can be, but the movie gets traction out of the gradual improvement of not only the team, but of White as a coach and an empathetic human being. Instrumental as well is his role as a mentor to the young runners, a figure who represents the ambition and education that could elevate them beyond the crop fields of McFarland. Here again, the racial politics are a touch dicey, but this is based on a true story, so it’s hard to get too upset at symbolism that is unavoidable if you want to commit this story to film. White’s also positioned as a man on his last line of credit after temper issues at some of his previous jobs, so there’s something to be said for these boys being the ones to unearth White’s nurturing side. This isn’t among the best of Disney’s sports movies; that title still unquestionably belongs to its progenitor, Remember the Titans, but McFarland, USA acquits itself well on its own merits. It’s a feel good movie through and through, so don’t expect challenging drama, but there are worthwhile components of racial reconciliation and the celebration of disparate cultures that add to the mere drama of an unlikely cross country team at a poor high school in the 1980s.