Family is everything and when the loss of a child occurs, it can come with devastating results. Let Him Go, is a new thriller starring Kevin Costner and Diane Lane as two aging grandparents who seek out their only grandson who’s been taken away by their son-in-law’s family. The result is a quiet film that offers tender moments, shocking violence and a story that is tied together from a wonderful screenplay and direction from Thomas Bezucha (best known for making romantic comedies). In some sense it’s a tense drama and a revenge thriller all wrapped up in a movie that reminded me of the old western films I used to watch when I was a lot younger.

The film takes places in Montana where Margaret and George Blackledge are living a quiet life on their farm. They tend to their horses and enjoy every waking moment to spend time with their grandson Jimmy. He’s essentially a newborn and the Blackledge’s son James (Ryan Bruce) appears to be happy with his wife Lorna (Kayli Carter). Tragedy strikes early when it’s revealed that James was thrown off his horse while riding resulting in his death. A tragic blow to start the film.

Years pass and now Lorna marries a man named Donnie Weboy (Will Brittain). The grandparents aren’t too fond of him but they care about the welfare of Lorna and little Jimmy (who’s three now). As we watch the film and come to know each of the characters, we come to an understanding that this Weboy fella isn’t the nicest of guys. One day, Margaret spots them in town where Jimmy drops his ice cream cone and the new step-father physically strikes the boy and his new wife! It’s a shocking scene and Margaret becomes concerned. Later, the film switches direction as the newlywed couple leave Montana without warning and return to the hills of the Dakotas. No warning, no note, not even a phone call.

Margaret persuades her husband George to go with her in order to bring their grandson home. Somewhere he can be safe and grow up in a loving home. They later meet with the rest of the Weboy family (who have a reputation around town) and things go south pretty quick ending in a bloody finale that’s equal parts terrifying and satisfying. The film primarily takes place in the early 1960s and everything looks beautiful. From the wardrobe, the cars, the vast landscape coupled with the gorgeous cinematography and even the small-town feel was a nice touch. However, if you’re under the presumption that this film is a simple revenge tale then you would be sadly mistaken.

While there is some violence in the movie, I was more impressed with the quieter scenes. Scenes between George and Margaret and how they come to work together in order to achieve what they are seeking. There’s even a scene where they meet an Indian man who tells a tragic story but he plays an interesting role in the film. Two Weboy characters I will mention are the mother named Blanche (Lesley Manville) and Uncle Bill (Jeffrey Donovan). One of the best scenes in the film is when the Blackledge’s meet with the Weboy’s for dinner at their house. Everyone is in attendance and we can tell right from the start that this dinner scene isn’t going to end with laughs and hugs. It’s incredibly gripping and I have to give credit to Lesley Manville here. She’s quite chilling for the scenes she’s in and kudos to her for making me feel uneasy. 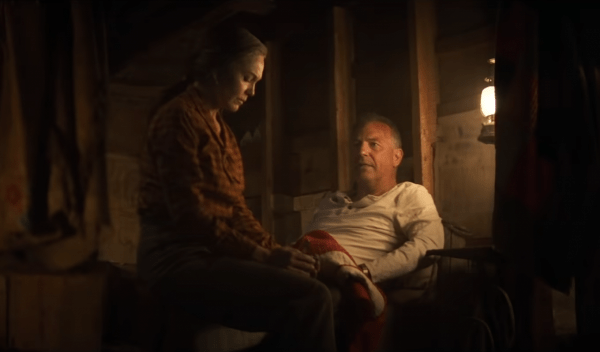 Let Him Go is a near perfect film that showcases some of our finest legendary actors. Diane Lane and Kevin Costner do great work and I absolutely loved the screenplay which was based on the book of the same name by Larry Watson. The action is hard-hitting and realistic and traveling back to the great outdoors of the west in the early 1960s makes this movie even better. This is one of the films that Clint Eastwood would be inclined to make. It’s a simple story but adds a great amount of character development and offering plenty of suspense in order for us to grip our seats during the final act. Let Him Go is a great movie that admittingly may bore some audiences, but for others, is a real cinematic treat! Plus, I have to mention a truly amazing soundtrack by Michael Giacchino. His score is like icing on the cake; it completes the entire package.