What exactly does money buy you? It’s a question that ponders me from time to time and after watching Kajillionaire, I think I have have found my answer in a manner of speaking. Movies offer us glimpses of different people’s lives and the situations that they encounter. At times we identify with these characters and other times we come to reflect on them. Kajillionaire manages to do both in ways that actually surprised me, however, with this movie being marketed as a comedy, you may find yourself puzzled as to the lack of laughs while viewing this unique feature from director Miranda July.

The story takes place in Los Angeles where a family of grifters is doing all they can to make a score. Now, before I jump ahead of myself, this isn’t a typical heist film. It’s nothing like Ocean’s 11 or my personal favorite, The Sting. Instead, this movie is about the daily life these grifters engage in. They live in a office space that isn’t exactly up to code and being that it’s only five-hundred dollars a month in rent, you’d think they would have in made in one of the most expensive cities in the United States! Nope, they are three months behind in rent, they appear to not have had a shower in quite awhile and don’t seem like a typical family- one that works together through love and effort in order to survive.

We have Robert (Richard Jenkins) and Theresa (Debra Winger) as the parents who have taught their daughter Old Dolio (Evan Rachel Wood) to rob, cheat, steal and deceive ever since she was just a little girl. Outside of stealing, she appears to have the mental capacity of a preteen even though she’s actually twenty-six. With her long hair that appears to be quite dry and wearing clothes that resembles Jay from the Jay and Silent Bob films, Old Dolio is stuck to her parents like glue on a book’s spine.

They have no money to their name and spend every waking moment looking for an easy score. They aren’t your typical thieves who will outright rob you at gunpoint but will be quite sneaky in the way they will get the money they need. One day while flying, the “family” meets a young woman named Melanie (Gina Rodriguez) while sitting next to her on a plane. They make small talk and eventually open up to her about what they are doing on the flight. It’s a plan in order to get some fast cash. Melanie seems like a nice lady and goes ahead with the plan for some reason. The movie doesn’t have time for explanations like this simple detail. For unknown reasons, Melanie plays along and begins to join in on the family’s schemes to make money.

Now, I mentioned that this is marketed as a comedy and sure enough there are a couple of laughs but to call this a comedy would be generous. This is a drama in every sense of the word and for people who think they are watching a heist/comedy film, you’ll be sadly mistaken and bored while viewing Kajillionaire. Personally, I wasn’t bored but I did enjoy seeing the moments of how this family interacted with each other, or lack of a better word. Both Robert and Theresa treat Old Dolio unlike anything resembling a loving relationship within a family dynamic. She’s the one that no one will notice or even suspect. Let Old Dolio take all the risk while the parents wait around the corner so they can split the score evenly three ways. It’s quite sad to think about but the acting here is truly wonderful to see.

The other moments that are great are the ones between Old Dolio and Melanie. Melanie is intrigued by this young woman who clearly missed out on childhood and self-discovery. The moments they share together are what make this movie really shine and the point of the film is not about earning all the money in the world but what we miss out when something in our lives is taken away. This family isn’t great and sadly it’s Old Dolio that’s the one who has suffered the greatest but only realizes it too late in a crucial moment with her parents. Writer and Director Miranda July (whom I’m unfamiliar with) has crafted a unique film that blends the calamity of this family and idea of what lies ahead with one breaks away from everything they’ve ever known. It’s simple, sweet and quite a treat. 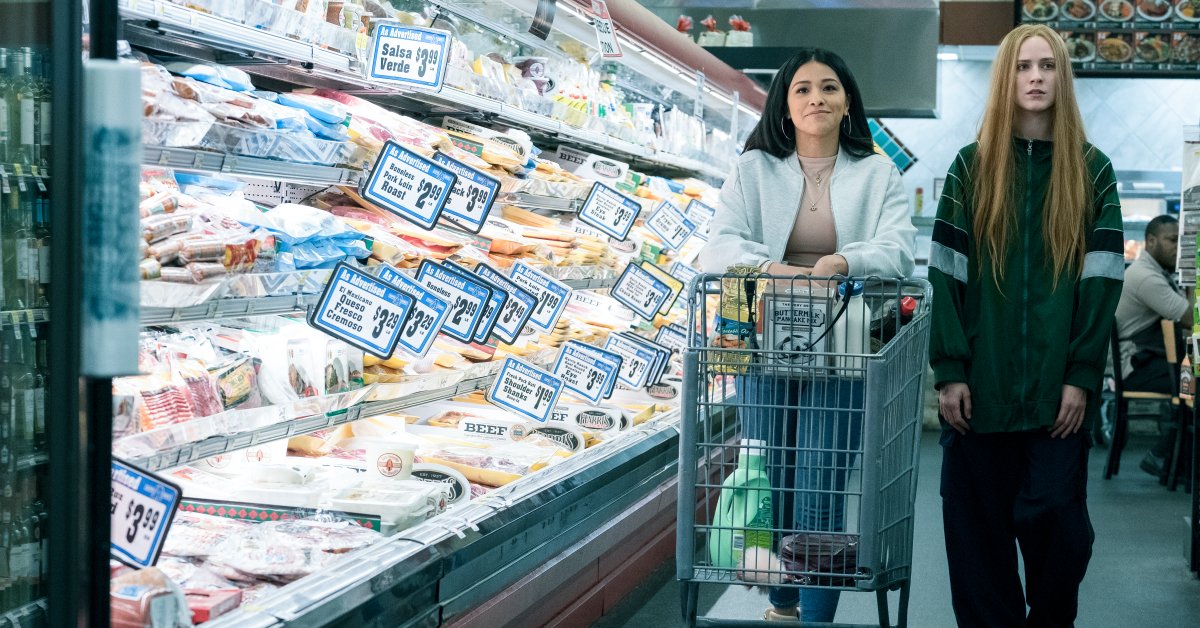 Despite all the moments I enjoyed, Kajillionaire isn’t a movie that will bring the audience flocking to the theater. It may not be exciting to watch or laugh out loud funny, but the acting is good, the story is simplistic and the end result is one worth talking about. Again, what does money buy you? I may have gotten some answers but Kajillionaire doesn’t exactly feel like a heist movie that expels excitement or thrills. It’s a good film that shows promise from a director who succeeds in creating interesting characters that will be fun to talk about. I just wished there was more to the film than what’s provided. It’s could’ve used more additional scenes and perhaps more backstory but for what it is, I like Kajillionaire for everything it tries to be.