You know his name; you know what he’s capable of and now the odds are truly stacked against him. John Wick was given a really bad retirement plan because ever since he got out of the game, his life has been a living hell. John Wick Chapter 3 Parabellum is the third installment of the hugely successful franchise that started back in 2014. Known for its simple plot, excellently choreographed action sequences and introducing us to a secret organization, John Wick is a movie character that action fans have come to love seeing. With this third entry does it prove that Keanu Reeves has a trilogy that surpasses The Matrix? And is the two years that we’ve been waiting for this sequel been worth it?

Taking place minutes after the conclusion of Chapter 2, John Wick is now the most hunted man in New York City. He has a $14 Million-dollar bounty on his head and everyone wants a piece of it. He killed a man on the Continental grounds and for that the High Table wants his life. Every action has consequences and the price to be paid is that blood must be spilled. He has been declared “excommunicado” which means that all services that are provided by the Continental are now closed to him. He has no help, he’s on his own.

John Wick (Keanu Reeves) is a man of little words in the past, but this time we get to hear him speak more. We learn more about Wick’s past and the organization itself. He wants help and believes that he has a way to get what he needs so that his life can be spared. He just has to make it out alive. As a fan of the first two films, John Wick certainly delivers on the big action moments. They are brilliantly choreographed and are smooth to watch without the excessive need to use cuts in between. If you thought the violence was impressive or brutal in the first two entries then you’re in for a surprise with this one.

Wick killed two men with a pencil in Chapter 2. In Chapter 3, there’s plenty of gunplay but now we have swords, axes, knives and even a book come into the fights. People in the theater were shocked at what they were seeing on the screen, I heard many “did you see that?” and “oh man!” said. I for one, became excited as well, and just for good measure, Wick does say that famous Matrix line and when he did I applauded and cheered! The cinematography by Dan Lausten is clean and crisp to say the least. The various locations are grand and the action is handled in a way that it will make you return to see them again and again.

There are some new characters that have entered this time around and one of them is Sofia (Halle Berry). She has a history with John and is less than happy to see him. There’s an extended fight with her and John trying to escape and she commands her two German Shepard dogs to assist them. It’s wonderful to watch and at times I actually thought it was real instead of just being an action sequence. Another key figure is the Adjudicator (Asia Kate Dillon) who speaks for the High Table. She’s been brought in to deal with the Wick problem and all who’ve helped him along the way.

Some regulars do return such as Winston (Ian McShane) Wick’s close friend and Manager of the Continental. Charon (Lance Riddick) the concierge of the Continental and of course the Bowery King (Laurence Fishburne). Of course, John does make sure that his dog is safe from all the chaos he’s about to endure. Berry and Dillon do great work here too. Berry provides some kick-ass fighting and her moments with John provide a lot of insight into their past and Dillon is excellent as the cold-demeanor of a person working for the High Table. The only loyalty they know are the rules that are meant to be followed and they will stop at nothing in trying their best to kill John Wick. But as we know, killing the Baba Yaga is something that is easier said than done. Although John does get brutally assaulted and refuses to give in. I almost feel sorry for Keanu Reeves because he must’ve been exhausted. 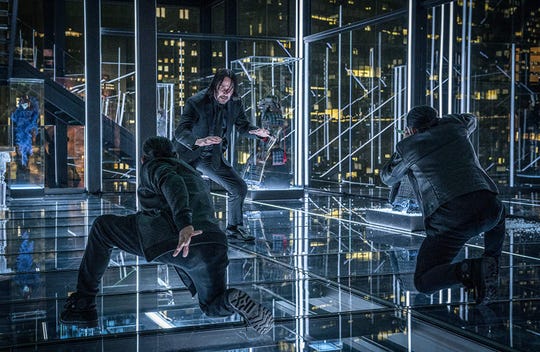 Verdict: 5 out of 5 Stars
It has to be said that John Wick Chapter 3 Parabellum is the best entry of this franchise. The action is brutal, inventive and is something that fans will be wanting. The story provides a great deal of information about the High Table, the history of the assassins and the thrills to see if Mr. Wick can survive. This is a movie made by filmmakers (with high recognition to Director Chad Stahelski) who wants to provide the audience with the most entertaining experience possible and they have done more that anyone could’ve thought. John Wick Chapter 3 Parabellum is glorious fun, brutally entertaining and serves as a great entry in a trilogy that Keanu Reeves can be proud of. I say see it twice; one to find out what happens and second to relive the amazing moments that are sure to be talked for a long time. The two years has been worth the wait and Mr. Wick will surely not disappoint you!