Do you ever get the feeling that life isn’t turning out the way you hoped for? I think most of us can agree that we all wish circumstances could be different for us especially when something tragic has occurred. That’s essentially the main theme of Bloody Hell, an Australian horror film that has enough humor to having you laughing the whole time and features a plot that’s so insane you’ll wonder to yourself, “what did I just watch”. This is a goofy movie that benefits from a witty script, good acting and a sense of style that reminded me of the over-the-top intensity of that office killing movie Mayhem!

The story involves a man named Rex (Ben O’Toole) as a man who is given the worst deck of cards that life has to offer. He thwarts a bank robbery in progress but ends up getting an innocent bystander killed in the process which results in him serving an eight-year prison sentence. “This wasn’t self-defense, this was madness” says the prosecutor during his closing statement to the jury. After his stint in prison, his story and picture hit the papers and everyone recognizes him. People take pictures, talk to him, ask him about prison life; all types of questions that no one wants to hear. Rex wants to make a fresh start. He has some money, enough to start over, and decides to skip town in favor of Finland. Finland sounds a bit nicer than Boise, Idaho!

Upon arriving in Helsinki, Rex is relieved to see that no one is approaching him to take a photo, people aren’t bombarding him with any questions. It seems like Rex has a chance a piece but something strange did occur at the airport back home. Some people were staring at him and saying things in their Finnish language. He didn’t think much about it at the time and upon a cab he discovers that something is afoot. Smoke fills the car and Rex passes out! He then wakes up in a basement with his hands tied up on the ceiling joists and is missing his right leg!

Rex has awoken in a nightmare and this isn’t a dream. His leg has been amputated and he has no idea why this happening or what is going on! While he’s alone in the basement he engages in full conversation with himself. Yes, his mind has a body too although no can see him. He’s our inner voice but we can actually see our inner self! Rex and the inner self contemplate the situation and deduce that whoever did this to him are insane people. More than likely murderers or maybe even worse!

We later learn what the motive behind this ordeal is but it’s not what you’ll expect. I can reveal that the family who has taken Rex engages in cannibalism but there’s more to the story. Rex needs to escape with his life and if he has the strength maybe he can kill these sadistic psychos who sleep upstairs as if nothing happened. One of the family members does venture down into the basement and finds Rex. She means him no harm and together they strike up a conversation and soon realize that they can help each other. Her name is Alia (Meg Fraser in her film debut).

The movie itself is a blend of horror, comedy, relationships, loss and moving forward all tossed together into a bender and the result is immense fun. The script was written by Robert Benjamin and he makes good use of having the film not take itself too seriously. Sure, Rex is missing a leg, but why focus on the bad things; we have more important matters to solve. Arguing with your inner self, talking to Alia about the past and understanding how something like this can happen to such a nice guy are more important topics at hand.

Ben O’Toole is absolutely hilarious especially when he’s communicating to his inner self. He’s a man who just wanted a second chance but in no way did he expect a crazy cannibal family to come along! You may think with the content mentioned above that this movie would feature some gory moments and while there is some violence it’s not the main focus. Ben O’Toole plays a man who got a bad deal and is looking to make any situation better, even if that means his inner voice is kind of a dick at times. But, we sit there and laugh all along the way. 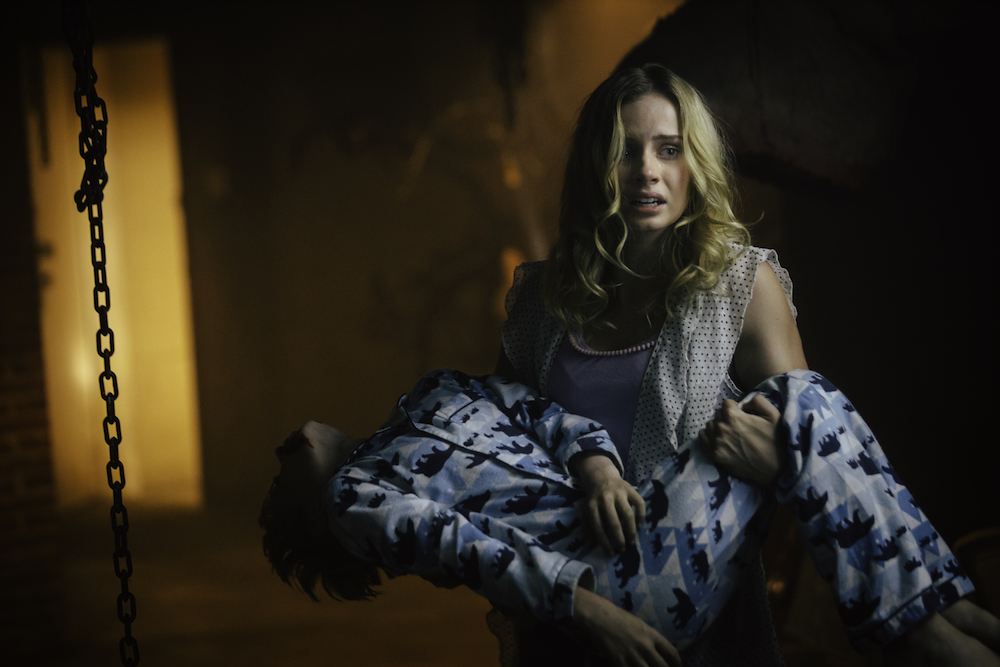 Bloody Hell is a perfect title for a movie that showcases a wacky script, some fantastic editing sequences and such an upbeat direction from Alister Grierson (Sanctum). The film is not to be taken seriously. It’s meant to make you laugh, entertain you and allow you to sink into a horror film that makes for one unique viewing experience. Ben O’Toole is the highlight of the movie as well as the cannibal family who are just upstairs doing there day to day activities while a man with no leg dangles helplessly in the basement. I love the energy, the quirky soundtrack and just how much fun the movie is. If you’re looking for a movie that’ll give you that shot of adrenaline then add Bloody Hell to your watchlist. You won’t be disappointed!