In regards to the impact of animation in Hollywood, the 90’s truly belonged Disney. From Beauty and the Beast to Toy Story 2, Disney released so many fantastic animated films from both their own animation studio and the newly founded Pixar. However, 25 years ago Disney released another animated film that seemed to be the most out-there and unique of the bunch, starring one of their most iconic characters. It has since garnered a nostalgic reputation for being so oddball, you might as well call it A Goofy Movie.

The film served as a follow up to the hit Disney Afternoon series, Goof Troop, focusing on many of the characters from the original series, taking place many years later to the point of being almost a total reboot. Yet A Goofy Movie fortunately, and surprisingly, manages to hold its own very well. 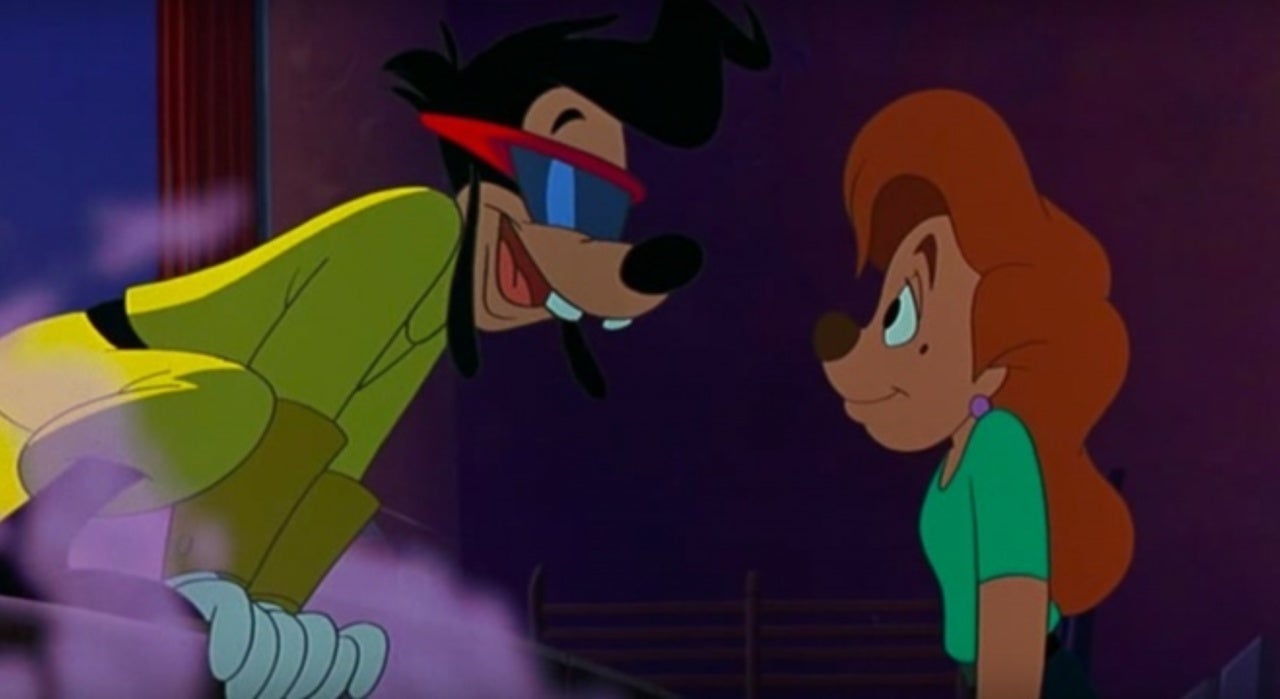 The story focuses on Goofy’s son Max, who’s about to start his summer vacation and makes a date to watch the Powerline concert with his crush Roxanne. However, his plans are halted after Goofy forces Max to do a father/son road trip, hoping to help them bond after being concerned about Max’s wellbeing. Max, still bummed about not hanging with Roxanne, tries to sabotage his dad’s planned road trip by making the concert be their final destination, as opposed to the fishing trip Goofy wants to go on.

Being a classic road trip movie starring a very slapstick-centric cartoon icon, one would imagine A Goofy Movie to be very over the top. And it’s true that the movie has lot of very wacky moments and overly indulgent 90s references, from Max and Goofy encountering Bigfoot to the Powerline concert resembling popular musical artists like Prince and Michael Jackson. But surprisingly the film comes across as a lot more endearing. For all its literal goofiness, this is a surprisingly laid back and often poignant film, as in the midst of every slapstick moment with Goofy, we get a lot of small and quiet character moments between Max and his dad.

The relationship between these two characters is very believable because we understand where both characters are coming from, with Max yearning for his independence and Goofy trying to be an attentive father. It’s your typical archetypes of the overbearing father figure with a rebel teenage son, but the writers know when to take things seriously and let the more dramatic moments settle in. It also helps that both Jason Marsden and Bill Farmer are able to tone it down for the emotional moments while also staying true to the nature of their characters’ namesake. The main focus is between Max and Goofy and thankfully the dynamic between these two is fantastic, which makes the movie all the more memorable.

As far as Disney animated films go, A Goofy Movie also looks great from an artistic perspective. Since it is a smaller film compared to something like The Lion King or The Hunchback of Notre Dame, it isn’t quite as grand or as impressive as what is typically expected from Disney. However, given how DisneyToon Studios films are more cartoony than your average Disney film, the animation is still pretty great. The characters still move very fluidly and fit with the film’s very expressive physical humor. It’s also fascinating to see a Disney tackle modern set pieces that aren’t the typical fantasy setting, thus making this film very unique compared to the rest of the 90s Disney lineup.

Being a Disney animated film from the 90s, it wouldn’t be complete without a memorable soundtrack. While the songs aren’t as grand as Beauty and the Beast, they’re still so memorable in their own right. The opening song, “After Today” and “On the Open Road” are both really catchy and upbeat tune and the one emotional song, “Nobody Else But You”, while not the strongest soundtrack entry, still adds to the relationship between Max and Goofy. But the true highlights are the Powerline songs (performed by Tevin Campbell) “Stand Out” and “Eye to Eye.” Both songs scream 1990’s cheesiness just from listening to them. It also helps that the concert sequence surrounding “Eye to Eye” is so rewarding to watch, especially seeing our protagonists be part of such a cool spectacle.

If A Goofy Movie does have any faults, it is that the other characters don’t have a whole lot to do compared to the two leads. These minor characters serve their supportive roles fairly well, but it may come as a disappointment to fans of Goof Troop that Pete and his son P.J. only have very minor roles, despite being a big part of the original show. Furthermore Pete’s wife and daughter, who were also big parts of the show, do not make an appearance or even are mentioned, which feel like a missed opportunity. Luckily, Pete and P.J. do have their funny moments and we even see other new characters such as Bobby and Roxanne, both of whom are likable in their own right. While not a huge part of the film, they serve their purpose well and don’t overstay their welcome. The core dynamic between Max and Goofy is what makes this film work, so maybe it’s a plus that they aren’t overshadowed by anyone else.

A Goofy Movie is every bit as entertaining as you remember and much more. The film’s excellent soundtrack and animation stand the test of time after 25 years but it’s the two lead characters and their relationship that truly give this movie its rewatchable charm factor.  If you’re looking for a Disney animated film that is truly distinct from the rest of the 90s catalogue, look no further than something that feels rather “Goofy”.