Check out Kevin Spacey as Richard Nixon for ‘Elvis & Nixon’

The first photo, first broken by The Hollywood Reporter, has emerged for the upcoming period comedy about the famous 1970 meeting between the President of the United States and the king of rock and roll, Elvis & Nixon. Kevin Spacey stars as Nixon opposite Michael Shannon as Elvis Presley. The movie will portray the rather ridiculous request Elvis made to become an FBI secret agent. 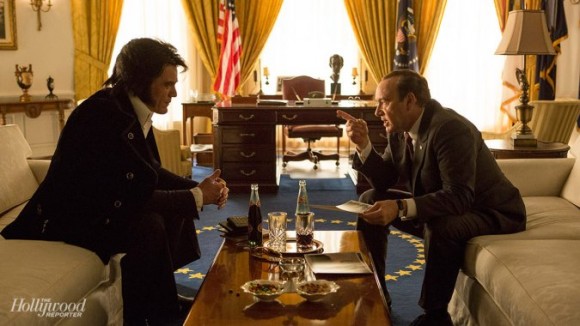 The real Nixon and Elvis meeting.

The movie tells the true story of Elvis’s endeavors to acquire a badge from the Bureau of Narcotics and Dangerous Drugs. Presley, fresh off a country-wide plane ride after being told off by his parents (forapparently spending too much on that year’s Christmas presents) arrived at the White House on December 21, 1970, to ask the president for a badge from the bureau.

Alongside Spacey and Shannon, the cast also includes Alex Pettyfer (I Am Number Four), Evan Peters (Kick-Ass), and Sky Ferreira (Larry Crowne) among others (you can check out the original casting news for Ferreira here). The movie is being directed by Liza Johnson and produced by Prescience. Currently, the rights to the film are being sold off at the Berlin Film Festival.

Elvis & Nixon is scheduled for release in 2015.