‘Singin’ in the Rain’ Turns 70: How Gene Kelly Revolutionized the Art of Dance on Film

Comden: “He rushed across the room rather breathlessly talking about Chantons sous la pluie. Through his interpreter we learned that Singin’ in the Rain was his favorite film and that he knew every shot in the film. We were flattered to death.”

Green: “And he told us that Alain Resnais felt the same way. So we were feeling very good at that party!”

Truffaut and Resnais aren’t the only ones who feel this way. Singin’ in the Rain (1952) tops AFI’s “100 Years of Musicals” list and ranks at number five on their list of the greatest American films ever made. It’s a magical film, perfectly blending industry satire, classic vaudeville, contemporary musical comedy, eye-popping Technicolor, and a charming central romance. I could easily sit here and put together a long list of reasons why Singin’ in the Rain stands so far above most of its peer group, but that would be obvious to anyone who’s seen it. Instead, I want to examine the film’s star/choreographer/co-director Gene Kelly and how he spent his career innovating how dance is presented on the screen.

Gene Kelly began his career on the New York stage as a dancer in the late 1930s before nabbing the lead role in Richard Rodgers and Lorenz Hart’s Pal Joey. His performance grabbed the attention of independent film producer David O. Selznick, who at the time was fresh off the groundbreaking success of Gone with the Wind (1939). Selznick signed Kelly to a contract before selling half of it to Metro-Goldwyn-Mayer. At MGM, Gene Kelly made his first film — For Me and My Gal (1942) — opposite screen legend Judy Garland in her first adult role, who became a vocal advocate for Kelly on set and helped him adjust his acting for the screen. For Me and My Gal performed well at the box office, leading MGM to buy out the rest of Kelly’s contract.

Gene Kelly’s actual break into stardom came with the Rita Hayworth vehicle Cover Girl (1944). He had previously staged his solo number in the all-star revue Thousands Cheer (1943), but Cover Girl was his first full choreographer job in Hollywood. This allowed Kelly to bring his specific style and ideas about dance to the screen. According to film historian Jeanine Basinger in her book The Movie Musical, “All his life Kelly worked to reconcile dance and film… He worked to capture the kinetic force of a flesh-and-blood dancer inside the image, planning the dance so that it could be cut and edited without disturbing a viewer’s sense of motion and involvement… He wanted to devise a cinematic language of dance that replaced dialogue and told the audience as they watched what a character thought, felt, was.”

In Cover Girl, this is most evident in the “Alter Ego Dance.” In this sequence, Danny McGuire (Gene Kelly) sees a reflection of himself in a mirror come to life and follow him down the street, appearing in various shop windows. The reflection then jumps onto the sidewalk, and the two Dannys enact his internal frustrations through dance. This sequence is unlike anything that could be done on stage, and it’s incredible to watch. It’s both technically impressive and always in service of the film’s story and characters. From this point on, Kelly served as the choreographer either for his numbers or the entire film on nearly every subsequent project.

In his next musical, Anchors Aweigh (1945), he continued experimenting with film techniques. The film’s most famous sequence is the one in which Kelly enters an animated fantasy world and teaches Jerry Mouse from MGM’s Tom and Jerry cartoons to dance. This wasn’t the first instance of live-action/animation hybrids—Walt Disney’s Alice Comedies (1923-27) and Willis O’Brien’s work integrating stop-motion into live-action films like King Kong (1933) both predate Gene Kelly’s arrival in Hollywood—but Anchors Aweigh features a much more grueling process to make their existence in the same space more convincing than those earlier efforts, as VFX artist Bill Taylor explains in a video for the Academy. 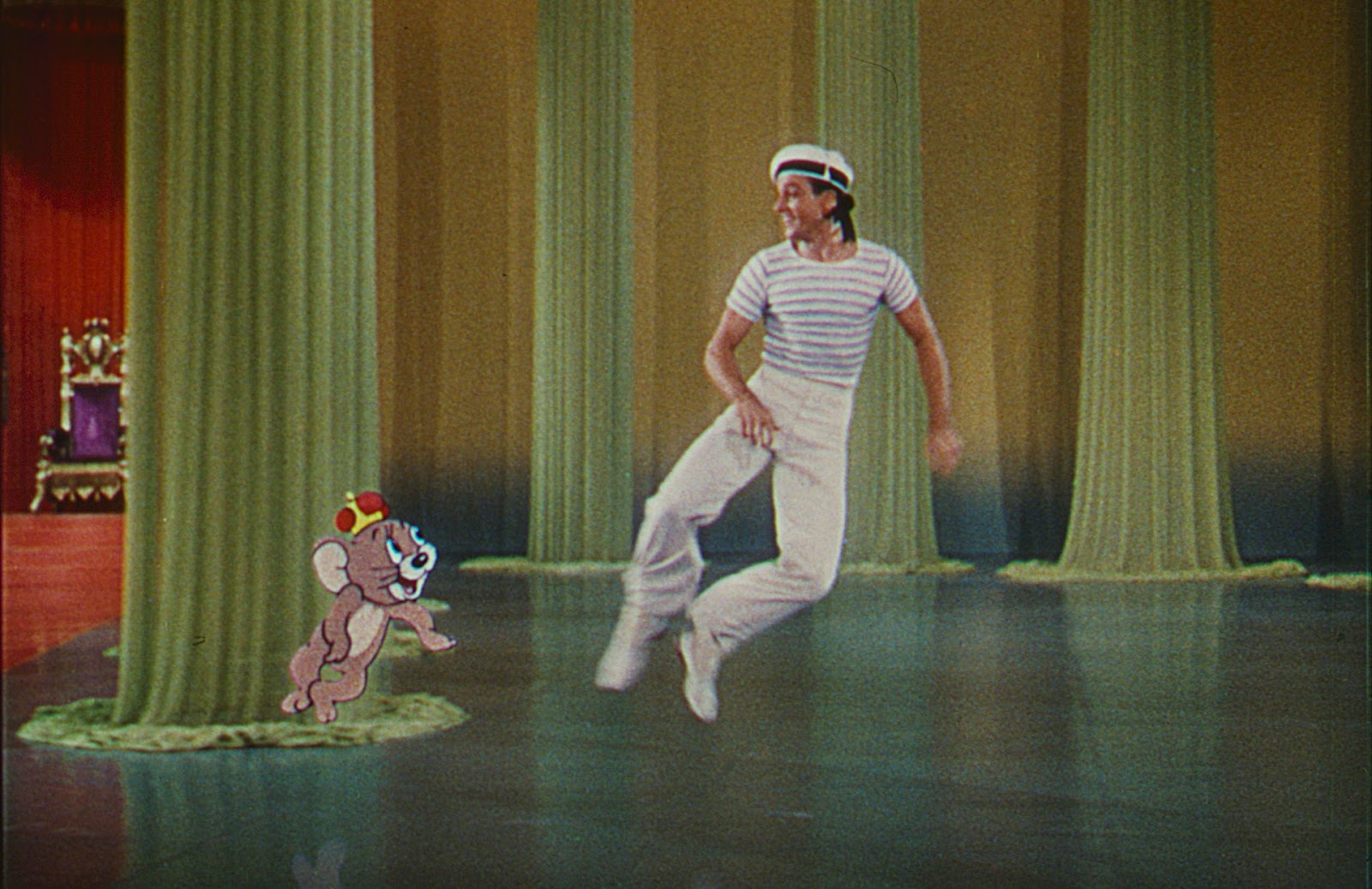 Gene Kelly teaches Jerry how to sing and dance in Anchors Aweigh.

Gene Kelly’s desire to integrate dance into the narrative of the film musical (arguably) reached its fullest potential in 1952 with Singin’ in the Rain. As Jeanine Basinger writes, “Singin’ in the Rain is a satire in which musical numbers are not only wedded smoothly into the plot but also further the theme: the mishaps of the transition to sound for both actors and technicians. It’s a film about film history, and its musical numbers comply.” Each song pays homage to early 20th century entertainment, both musical and nonmusical: “Make ‘Em Laugh” pokes fun at silent slapstick, “Fit as a Fiddle” is a pastiche of vaudeville routines, “Moses Supposes” is a Marx Brothers tribute, “Beautiful Girl” is inspired by Busby Berkeley, and the list goes on.

“Good Morning” also illustrates how Gene Kelly innovated how musical numbers were shot. Fred Astaire’s films from the 1930s—including Swing Time (1936) and Top Hat (1935)—popularized the use of full-body shots, replicating the field of view experienced by audiences of stage musicals. Kelly keeps those framing techniques while allowing the camera, and thus the dancers, to move freely throughout the physical space. This brings the kinetic forces of live dance to the medium of film, replicating the visceral experience of viewing theater. Most of the film’s musical numbers follow this pattern, but “Good Morning” is a standout for how it fully uses all of the space in Don Lockwood’s Hollywood mansion. Don, Cosmo, and Kathy dance their way through various rooms, interacting with the objects and furniture surrounding them.

The climactic “Broadway Melody Ballet” fully embodies Kelly’s desire to create a “cinematic language of dance” (as per Basinger), and it—as well as the titular ballet sequence from An American in Paris (1951)—brought to the screen what Agnes DeMille had done for stage musicals in the 1940s. DeMille was the choreographer for the original productions of Oklahoma! and Carousel, among many others, and one of her signatures was the use of the dream ballet. She recreated her dances for the film adaptation of Oklahoma! in 1955, and watching it; you can see the similarities between her work and what Gene Kelly brought to “Broadway Melody Ballet” and especially “An American in Paris Ballet.” Their dances tell the story without words, and they get across the characters’ internal feelings more effectively than any spoken dialogue. 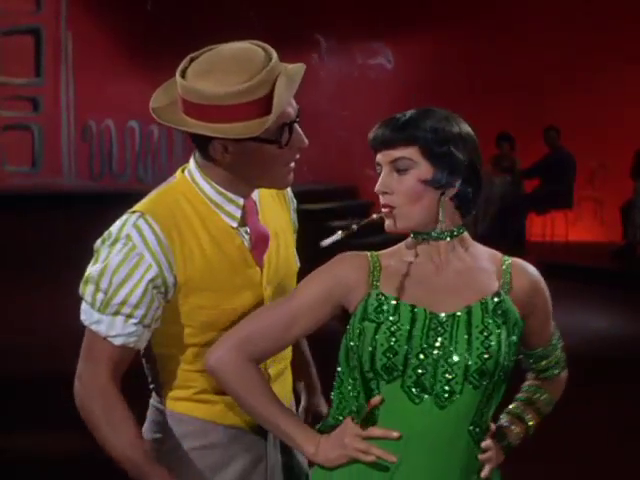 This is not an extensive record of everything that Gene Kelly did to further the art of dance on film. His film appearances after Singin’ in the Rain are just as wonderful. I’ve included a lot of his work in hyperlinks throughout this article, but just to list a few more of my personal favorites: