A Character Study of the Man They Call Leatherface!

We all have varying definitions of what makes a horror movie scary but having a diabolical villain, one hell of a story, and vivid imagery can shake audiences to their very core. Director Tobe Hooper and co-writer Kim Henkel created one of the most influential horror movies ever made when The Texas Chainsaw Massacre was released in 1974. With clever marketing hailing the movie as “based on true events,” audiences flocked to the theaters to witness this supposedly “true story.” They were in for the shock of their lives and left the theater terrified of what they saw. The villain was revealed to be a large, hulking figure who wielded a chainsaw as his signature weapon when chasing his victims down. Even worse, the killer wore the skin of a person’s face!

Imagine the audience’s reaction back in 1974. This was before Black Christmas, Halloween, and even Friday the 13th. The only thing that equally matched this level of fear was the creature features from the 1930s and perhaps Peeping Tom from 1960. This was the first movie to feature a killer who had all these distinguishing characteristics. With the chainsaw in hand and wearing the mask made from human skin, the infamous Leatherface entered film history as one of the most iconic horror movie killers of all time. But what makes him so scary? What are his origins? And are these movies that feature the killer based on true events?

Instead of focusing on the movies themselves, even if the timeline makes absolutely no sense, let’s go back and involve ourselves in a character study of the one they call Leatherface. One of the very few horror icons that we feel somewhat sympathetic towards.

While the debut film was hailed as “based on true events,” the story of Leatherface is largely fictional. There are some elements in the movie from which they are inspired by real-life events, but even to this date, there have been no reports of a chainsaw-wielding killer in the state of Texas. The story itself is inspired by two criminal cases that shocked the nation and the entire world once the news was reported.

The first is the story of Ed Gein, a mentally disturbed man who murdered two women in Wisconsin and proceeded to butcher their bodies post-mortem. He then decorated his house with various body parts taken from deceased bodies after he robbed their graves. He was arrested on November 16, 1957, and it was two police officers, who were searching his farmhouse, discovered the grisly remains of body parts that were located all over his home. The Gein story is filled with tragedy, abuse, and the obsession of Gein’s adoration of his mother. Despite Gein’s crimes playing a large part of the inspiration for Leatherface, Norman Bates in Psycho, and Buffalo Bill from The Silence of the Lambs, he wasn’t the ghoulish, evil man that these horror icons are best known for. He was a disturbed man whose mental decline following his mother’s death sharply altered his perception of the world and his lack of understanding once he was arrested.

The second part is the story of Dean Corll, specifically Elmer Wayne Henley. Dean Corll was a serial killer who lived in Texas, and with his accomplices Elmer Wayne Henley and David Owen Brooks, they abducted and murdered at least twenty-age teenage boys in the early 1970s over three years. Both Henley and Brooks were barely eighteen years old when they were arrested, and based on their crimes, this served as inspiration for Leatherface’s behavior. Two criminal acts that shocked the world became the inspiration for Leatherface and his deranged family, which could be the Sawyers or the Hewitt’s when referring to the 2003 remake.

The problem with The Texas Chainsaw Massacre franchise is the continuity. The films don’t follow coherently to their previous titles, and Leatherface himself goes through several name changes. The one thing that has remained consistent is the treatment of Leatherface at the hands of his family. Leatherface isn’t some blood-thirsty killer looking to score the highest body count; he’s enslaved to his family and is best described as a mad dog killer who is let loose from time to time. He serves his family, never utters a word, and kills anybody who dares trespass on his family’s property.

Some of the films in the franchise have attempted varying origin stories to develop a better understanding of the character. In Leatherface, we see him as a young man who spends most of his life in a mental institution after being removed from his murderous family. In Texas Chainsaw 3D, he is portrayed as the anti-hero instead of the grisly killer we were introduced to in 1974. In the remake and subsequent prequel, The Texas Chainsaw Massacre The Beginning, it’s revealed that Leatherface was born in a slaughterhouse after his birth mother died during delivery. Suffering from a skin condition, the young baby is discarded in a dumpster and is later retrieved by Luda Mae Hewitt.

Leatherface has no personality other than a large man who displays childlike traits. In the 1974 film, Leatherface is seen wearing dresses and even putting on makeup. Since he doesn’t talk, it appears that Leatherface wasn’t able to develop fully and is essentially stuck with childlike tendencies. The story of this character has been adapted in literature as well, with a special nod to comic series that provide crucial backstory that makes us feel even more sorry for the character.

One of the most frightening aspects of Leatherface is the fact that he runs with immense agility and can dispatch his victims with ease leaving them defenseless against him. Even after killing, the character shows no emotion or empathy. He can’t be reasoned with, bargained with, or even fooled. The character isn’t like Michael Myers as the killer who can’t seemingly die. Leatherface can be hurt; we even see this when his arm gets amputated near the conclusion of the 2003 remake. Leatherface closely resembles Jason Voorhees from the Friday the 13th franchise. Both Leatherface and Jason protect their property from the intruders who cross their paths. 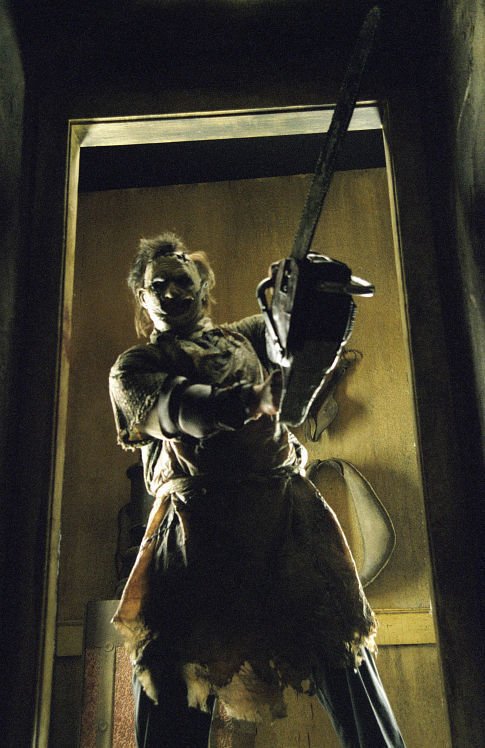 Ever since 1974, the very idea of Leatherface has been terrifying to contemplate. A man wielding a chainsaw who is hellbent on chasing you down is scary enough for anyone. But the one thing that separates Leatherface from other horror icons is the notion that we care about him. I know that may sound strange because he is a killer, but Leatherface didn’t choose this life. He was bred to be this way, and because he is socially isolated from the rest of the world, any outsiders would appear to be a threat to him.
It is rather amusing when you consider the idea that Leatherface only attacks when someone either breaks into his house or enters his property.

Leatherface isn’t one to attack for the heck of it. He’s often provoked and will react in the only way he knows how. His family calls upon him when an intruder arrives, and once that chainsaw is revved up, you’d better get a running head start.

With the Texas Chainsaw Massacre releasing this month serving as the ninth entry, Leatherface has gone through some dramatic transformations. Tobe Hooper wanted to change things up and bit and included a bigger emphasis on dark humor in his 1986 follow-up The Texas Chainsaw Massacre 2. Parts three and four became increasingly goofy and were certainly not as scary as the debut film. All that changed with the 2003 remake was released and proved to be a massive box office success that sparked the remaking of horror classics.

In the 2003 remake, that film painted the idea of showing the audience the true depravity that the Hewitt family displays here. It’s bloody, mean spirited, cruel, and has a visual flair that feels appropriate for a horror film. Sure, the film isn’t good in terms of a plot, but in creating an impression, it more than succeeded. I appreciate the remake for what it was trying to achieve, and I will say that I feel that Andrew Bryniarski was an effective Leatherface. His overall size and performance made for a truly scary experience.

The prequel to the remake also laid on the cruelty pretty thick but proved to be a lackluster experience and a forgettable one at that. Both Texas Chainsaw 3D and Leatherface tried to be different but once again lacked the scares and instead doubled up on the gore and poorly written scripts.

The best film by far is the 1974 original. It’s scary, intense, and is perhaps one of the scariest films ever made. Instead of showing us horrific violence, it’s implied and left to the audience to determine what happened, which I think is far more effective. The script is simple, intelligent, and makes good use of establishing the imposing danger by allowing the suspense to play out. Plus, why does every film that followed have to recreate the chainsaw-wielding ending? Can’t you come up with something new? Yes, it was iconic, but no one likes recreations that just copy the original!

Now, we have the oddly titled Texas Chainsaw Massacre, which is a mess of a film. With the omission of his family, Leatherface is left all alone and is treated as your standard horror movie slasher. While the gore is aplenty, there is some worthwhile suspense, but overall, this ninth installment is nothing more than a bloodletting session.

I’m sure you noticed that I hadn’t mentioned the cannibalism part. To add more fuel to the fire, The Texas Chainsaw Massacre added the notion that the original family, the Sawyers, were cannibals, and Leatherface was killing those intruders only to eat them. But remember, grandpa is the best at killing, as true fans will recall. With the ninth film playing on Netflix, a future is likely for Leatherface, but after all these films, we have only two that are good. The 1974 original and the remake in terms of its atmosphere. The 2003 remake had something going for it when we witnessed Leatherface get attacked and hurt. This is the only film to do this, and why discontinue this trend?

A villain is only so scary, but after a while, they do need some kind of weakness. After all the suffering, pain, and torture that poor Leatherface has endured, seeing his death would possibly feel good to see. It would be the end of his terror, but it would also give him peace in the end. Leatherface is a killer, but not because he wants to be. His family raised him to inflict pain on others, the same way he suffered when he was young (this is further expanded in the comic series). Although seeing his appearance in Mortal Kombat X was quite a thrill and running from him in Dead by Daylight kept us on the edge of our seats.

In the end, Leatherface is a tragic figure that we can’t help but feel sorry for. He’s damaged, underdeveloped mentally, and is socially isolated from the rest of the world. Can we expect him to act any differently? Being that this character is almost fifty years old, he’s still one of the most terrifying horror movie killers ever created. Just hearing the sound of that chainsaw always sends chills down our spine, and seeing a man wearing someone’s face is the stuff of nightmares, even if that specific idea did happen.
For horror fans, Leatherface may not have the highest body count or the cleverest use of killing, but his impact, legacy, and creation by Tobe Hooper and Kim Henkel have provided the movie industry with one of the most recognizable horror villains that makes us wary about visiting those small towns in Texas.